This week has been truly significant on the road to reopening our economy and society. The much heralded ‘outdoor summer’ is well and truly underway with hospitality, attended sports events and live music all back on the agenda in the past few days.

Last night saw the first live music gig of the year, attended by 500 James Vincent McMorrow fans at the Iveagh Gardens. Tonight will see trial sports events with a limited number of spectators also taking place in Dublin and Cork.

Figures from Revolut show the extent of demand in the hospitality sector also. Spend in bars and pubs soared by 246% on Monday compared to the day previous. The maximum spend per minute hit €3,571.

Mobility figures are soaring, reflecting this increase in options for people to socialise now. Confidence among the public is also growing, according to new research from Amarach, featured below. And this week also saw the launch of an exciting new roadside Digital OOH format, featuring Disney+ as a launch advertiser.

Last week’s national Locomizer mobility data, based on analysis of mobile phone location movements via anonymised app reporting, shows a relative +14% increase on week previous, to +24% of pre-pandemic levels. Just two weeks ago, this figure was still below baseline. So nationally, mobility has increased by a quarter in the past fortnight. In the key Dublin market, city and county traffic mobility is now +50% above baseline, representing a strong rebound for the capital, which as is often the case for other major cities, thrives on a vibrant retail and cultural scene. 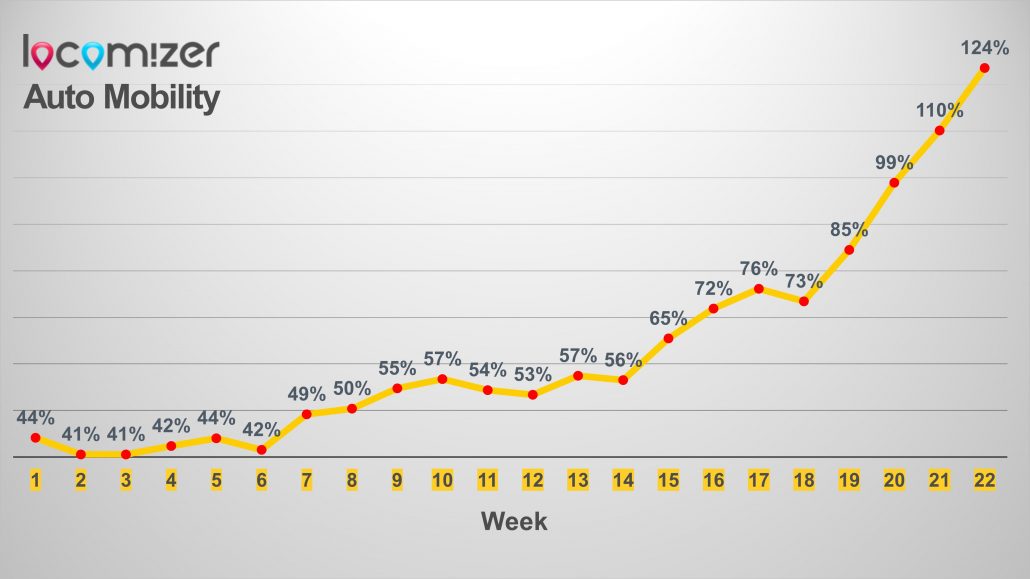 With mobility exceeding pre-pandemic levels it was the perfect time for Exterion Media’s launch of four Digital Bridges in the capital yesterday (Thursday 10th June). Located at Pearse Street, Amiens Street, Drumcondra and North Strand and measuring 18m X 2m, the LED advertising screens are the largest in the country. Dublin commuters marvelled at Loki star Tom Hiddleston looking down at them promoting the new streaming series from Disney+, one of the first campaigns on the new format. 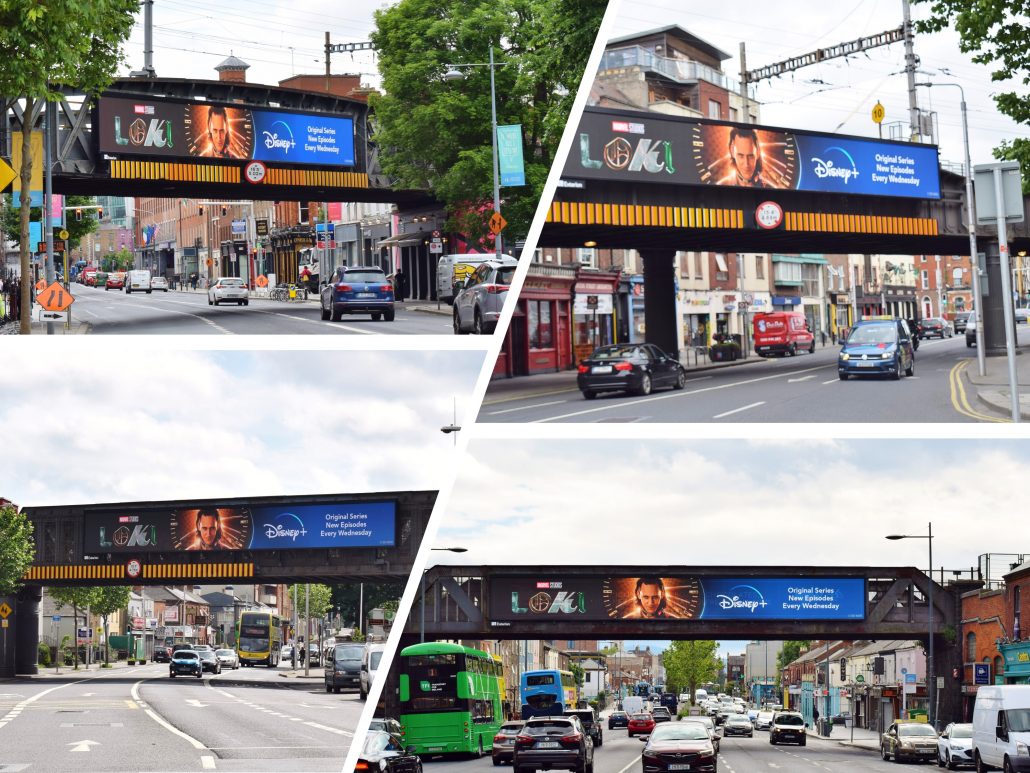 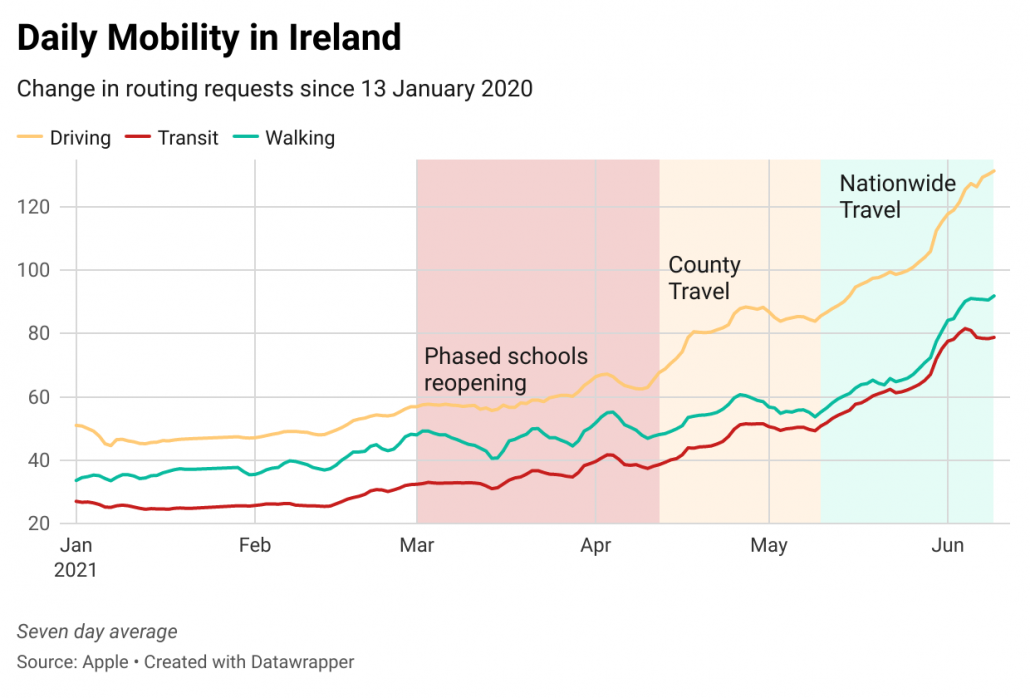 The sustained increase in mobility across all modes, is borne out by the monthly averages, with routing requests for public transport increasing threefold since January, while driving and walking have increased by 2.8 and 2.6 times respectively.

18-month highs were reported in destination counties, particularly those on the seaboard, who benefited from an influx of staycations over the bank holiday weekend. 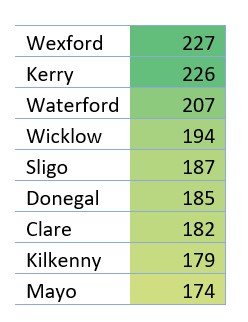 The sustained increase in mobility across all modes, is borne out by the monthly averages, with routing requests for public transport increasing threefold since January, while driving and walking have increased by 2.8 and 2.6 times respectively.

There were indications from government this week that the return of office workers to their normal workplaces may be sooner than previously expected. As many thousands of workers in the hospitality and leisure sectors returned to hotels, bars, cinemas and restaurants this week, it leaves office-based workers as the last major group primarily still working from home.

Research we conducted with Ipsos MRBI in recent weeks has shown a slight shift in where respondents are working from, compared to a month earlier. It should be noted that the latest wave of this research was conducted prior to the reopening of hospitality on June 7th. It shows now a clear difference in those working in their normal workplace and those working exclusively from home. Whereas in April the difference has been a mere 1%, that gap has now increased to 9%, with 47% now working only at their place of work, with home-only workers dropping from 41% to 38%. The blended approach has moved from 17% to 15%. 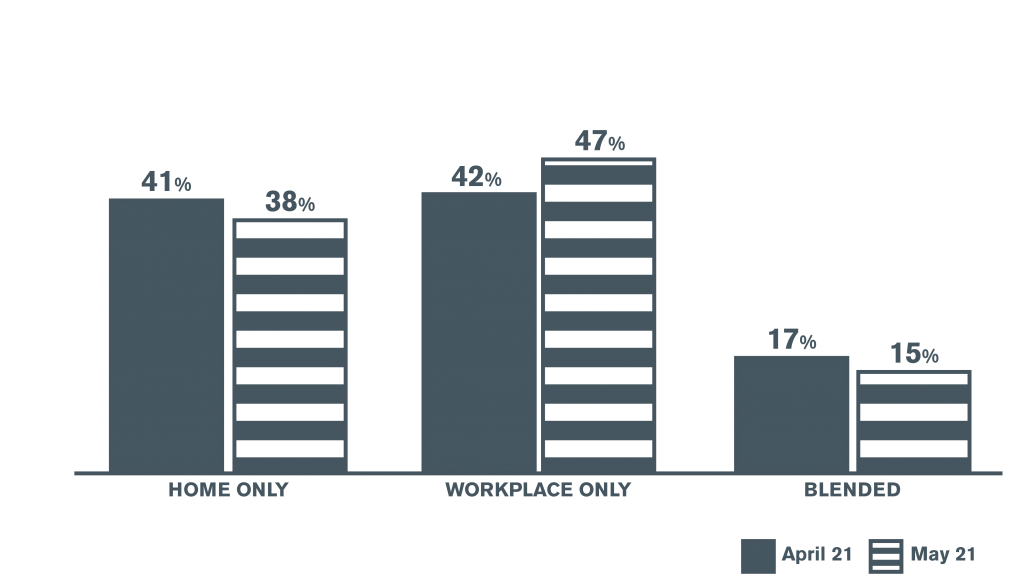 A greater percentage of males (42% v 34%) are working from home all the time. 66% of 18-24 year olds are working exclusively at their workplace compared to 39% of 35-44 year olds. There remains a significant gap among social classes also, with 59% of ABs working at home, compared to just 23% in the DE group.

The research conducted in May was based on 223 working Dubliners.

Trust is an important currency in the relationship between brands and customers. Brands that are not trusted cannot hope to survive, let alone prosper, in the long term. Research from JCDecaux and Clear Channel in the UK earlier this year says that 81% of consumers say trust is a deciding factor in their purchase journey. Trust creates loyalty, it builds customer advocacy and it helps drive new business. 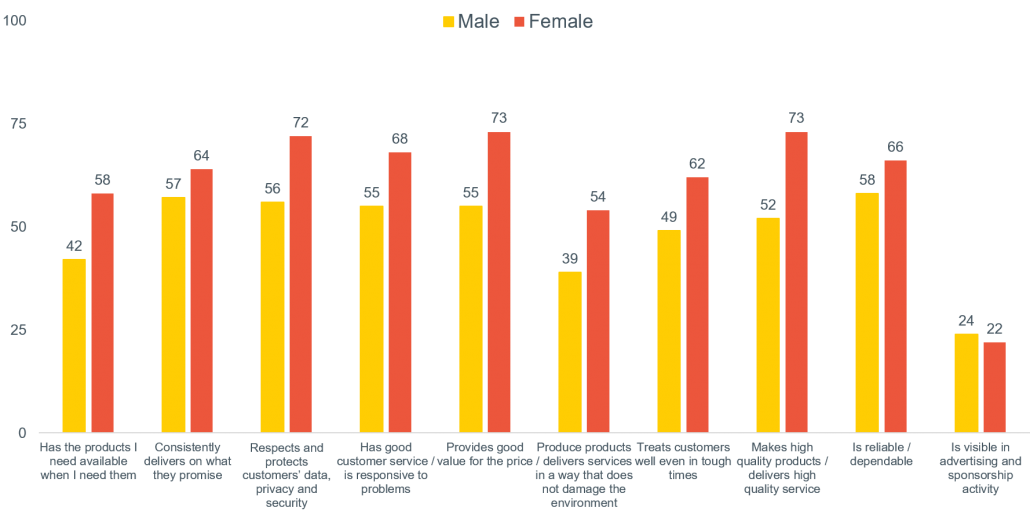 In nine of the ten factors surveyed, a higher percentage of females consider them ‘very important’, with the exception being ‘Is visible in advertising and sponsorship activity’, with 24% of males considering this to be very important compared to 22% of females. Almost three quarters of females (73%) consider ‘Makes high quality products/delivers high quality service’ as very important in building trust. Data privacy is also higher among females – 72% v 56%. The youngest age group surveyed, 18-24, consider customer service and value as the most important factors.

Interestingly, and perhaps surprisingly, ‘Producing products or services in a way that does not damage the environment’ was highest in importance among the 45-54 age group and lowest among 18-24s.

Visibility in the field of advertising and sponsorship divided age groups quite dramatically, with 18-34s giving twice the importance to it as the 35-54 age bracket.

Today marks the start of trial sporting events with spectators in the Republic of Ireland. Fans will return to the RDS, Tallaght Stadium and Turner’s Cross in a limited capacity this evening to enjoy live sporting events again. They are first of 16 published trial events across June and July, covering GAA, golf, football, rugby, athletics and horse racing. 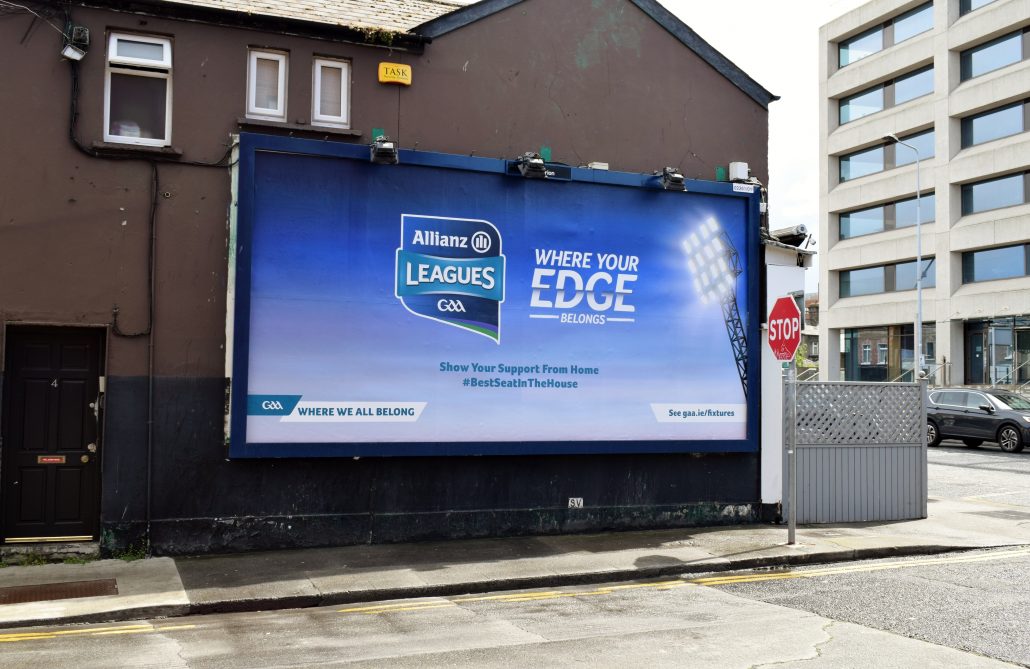 Minister Jack Chambers said: “I am acutely aware how eager fans are to see their home county, local club or sporting heroes in action one again. These expert-led guidelines are significant because they chart a clear path back to allowing large numbers of spectators attends games once again.”

These events represent a great opportunity for brands to engage audiences in positive environments through proximity or mobile OOH advertising. It’s a chance for advertisers to be contextual and really tap into the mood of optimism and joy that will no doubt mark these significant events.

Mood of the Nation

The Department of Health’s latest Public Opinion Tracker, conducted by Amárach Research on the 7th June, shows the nation is collectively feeling the most positive we’ve been since the onset of the pandemic. 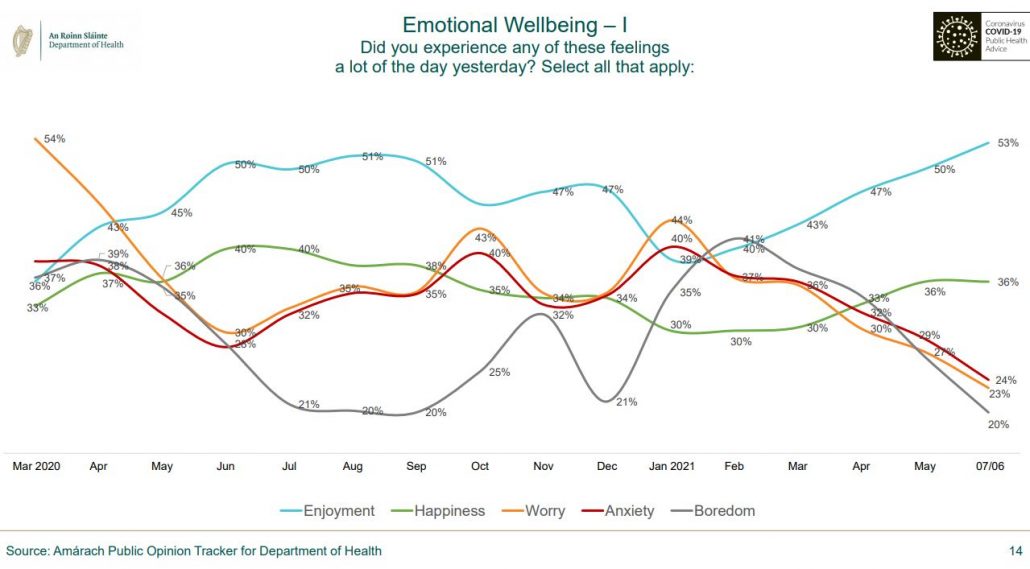 Over half of the respondents (53%) experienced the feeling of enjoyment the day previous to when they were surveyed, the highest level since the onset of the pandemic. Just over a third felt happiness, reaching levels close to June and July of last year which peaked at 40%.

Anxiety, worry and boredom were at lower levels too of 24%, 23% and 20% respectively. Stress and fear were also at new lows with 21% experiencing stress and only 6% feeling fearful.

Looking to current and future behaviour, 62% of the respondents stated they are staying at home more often which is again a new time low since the start of the pandemic, this corresponds with 65% in July last year at the height of reopening and is down from 88% in January 2021.

When asked if this was a behaviour they were likely to continue after the pandemic, less than a third stated they were contemplating staying at home more than going out.

As a nation obsessed with weather, the glorious sunshine we have experienced of late has a knock-on effect on our behaviours and purchases. As a result, advertisers have tapped into our sunny disposition with weather a focus in many an OOH campaign this cycle.

No doubt the BBQ will be fired up this weekend, and with grilling season here Safefood is highlighting the perils of an undercooked burger to shoppers in retail settings as they stock up on their BBQ essentials. 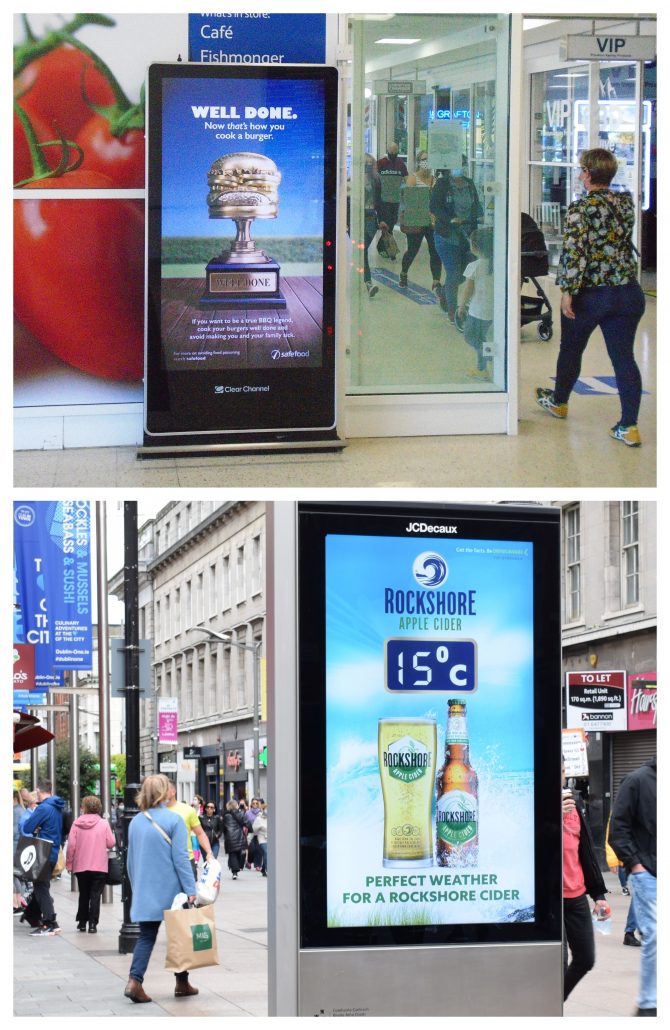 Meanwhile, Rockshore is employing our Liveposter dynamic platform to advertise its cider variant at times most relevant to the brand. The campaign offers the brand a chance to promote both its lager and cider range in rotation. When the temperature reaches 14 degrees and is dry, the Liveposter trigger automatically activates the cider creative, which features the current temperature and tagline ‘Perfect Weather for a Rockshore Cider’.

Weather content and scheduling is just one of the ways advertisers can add relevance and in the moment context to their advertisement. Our outdoor consumer study of 1,500 Irish adults, finds that two thirds of adults are interested in DOOH screens displaying weather-related messaging.

Now, Near, Next – Shining in the June Sun