Over the past few months, we have seen a gradual increase in the audience for OOH advertising. Schools, retail and now hospitality have all fully reopened. Mobility statistics are matching or bettering pre-pandemic levels. In those recent months, advertisers have really embraced OOH again and the market has been boosted by the launch of exciting new digital formats. So, it’s hardly surprising that brands, buoyed by an increasing confidence in the channel, are taking things a bit further and re-engaging with Outdoor specials.

Specials are fun and provide great talking points for agencies such as ours. But, let’s not forget, they are effective! We have an almost infinite palette with which to paint our cities and local communities. We are in the business of attention; and so, we must adopt new ways of achieving this whilst also embracing more traditional methods. Creative techniques, unusual formats, and surprising avenues to attention are demonstrably being explored and deployed to bring brands to our streets in exciting and fun ways.

This week, working with our innovation team at PML Group, some of the country’s biggest advertisers have done just that….

In a media first, Rockshore Hard Seltzer has taken over a number of Clear Channel retail digital screens in Dublin, dominating the entire loop in addition to wrapping the panel itself so as to look like an extension of the ad playing out on screen. The Diageo brand is also appearing on three wrapped Adbox Extra locations in central Dublin.

To celebrate the arrival of iconic series The Walking Dead on Disney+ Star, the streaming service has produced an equally iconic (and scary!) 3D special on two 48 Sheets on Rathmines Road. Zombie hands can be seen breaking through the poster in search of some new victims in D6! 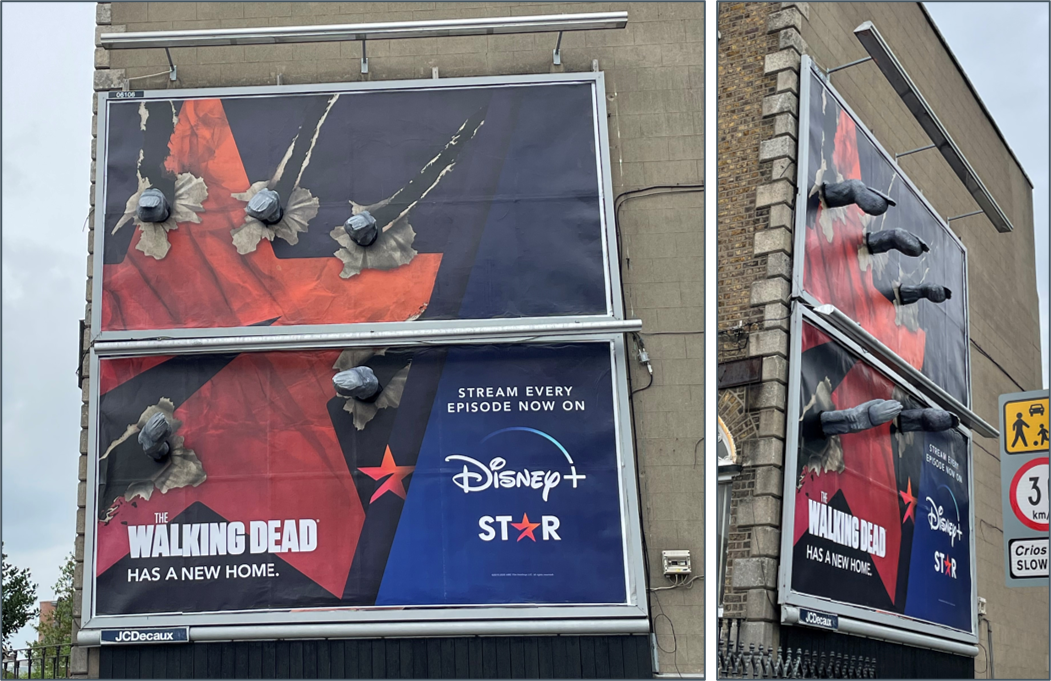 Mondeléz are celebrating the launch of Caramilk in this country with a few different Outdoor specials to help build awareness and drive response among its audience. If you visit Wexford Street at the moment, you’ll see a huge Spangley Golden Square, the gold colours reflecting the summer sunshine. Also, in a nod to the popularity of the product in Australia, some of the posters in the campaign are posted upside down, while a 2D special is also creating a stir on Macken Street in Dublin 2.

Bank of Ireland – Home on Out of Home

We’ve seen billboards made to look like football pitches or chocolate bars before but we’re pretty sure this is the first time we’ve rolled out the welcome mat on Outdoor. In keeping with their current ‘Home’ positioning, Bank of Ireland’s poster on Rathgar Road used material you’d find on your door mat to bring a scaled-up version to life. On Tenure Road, the site has been transformed into a giant picture frame, akin to what you may find in a hall or front room.

This week we are publishing the first set of findings from an extensive piece of research we commissioned on how Dublin consumers will be spending their cash over the coming months. The ‘Spending Time’ study looks at four key categories of consumer spending – Leisure, Clothing & Accessories, Personal Tech and Home.

The research was conducted by Ipsos MRBI among 300 Dublin adults.

To kick off this week, we are covering Leisure and Home. Overall though, the study points to an unleashing of pent up demand in the months ahead with high levels of intention across the various product categories. Levels of intent obviously vary by age and product type but generally, intent among women is higher than men across the majority of products.

Four in ten respondents intend to purchase hotel stays in Ireland in the ‘next few months’. For females, this is above 50% and the higher earning AB social class is highest, at 46%. In terms of age, the peak of 44% is among 35-44s but there are no major differences among age groups. 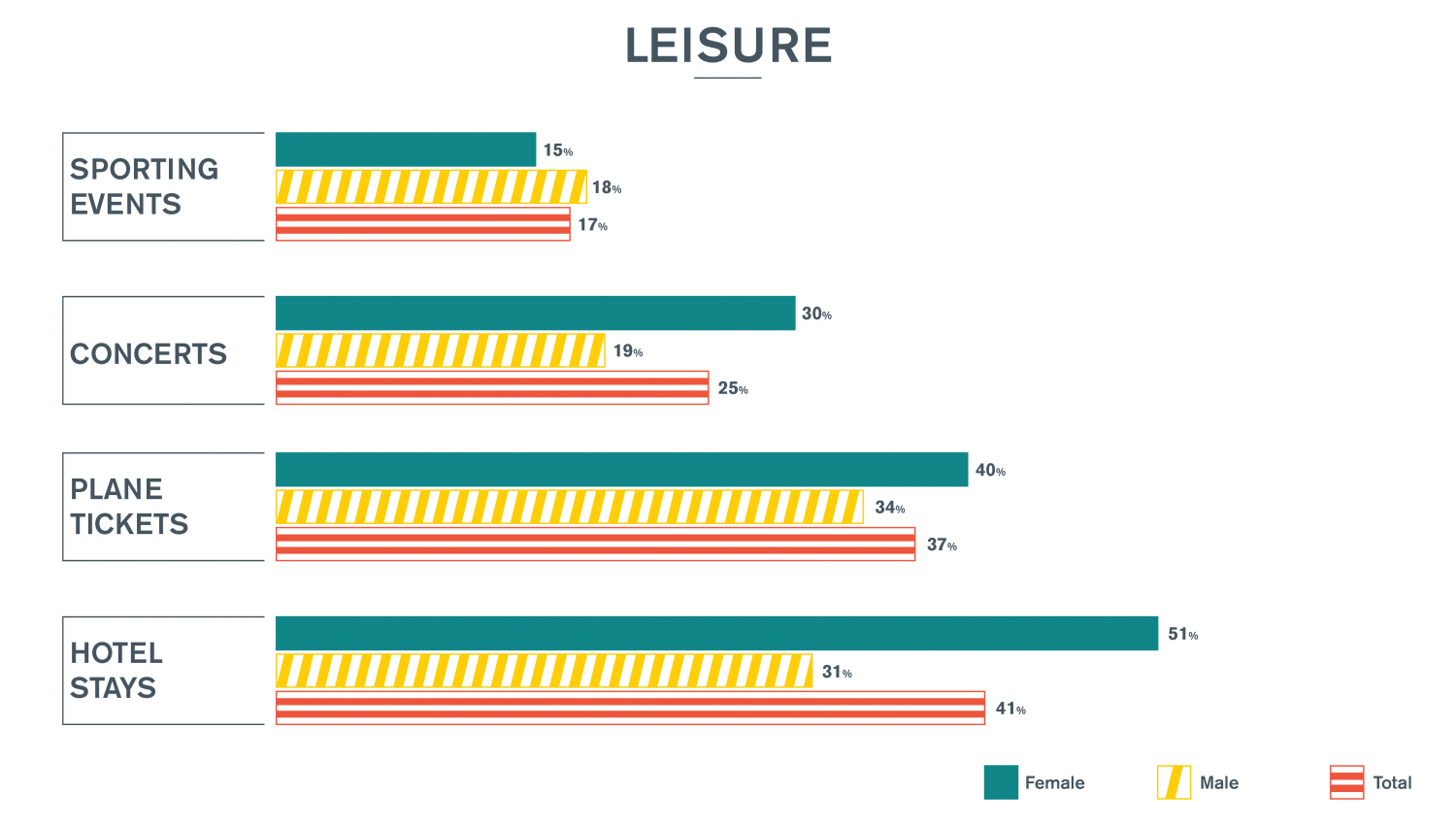 Younger people are more likely to be buying plane tickets with 44% of 16-24s intending to make a purchase in the coming months, compared to just 25% of 45-54s. Again, females register higher than males at 40% v 34%.

As vaccination levels increase by the day and sports and music events are re-emerging as entertainment options for people, Dubliners appear keen to re-engage in these activities. A quarter of all adults will be buying a concert ticket in the coming few months, rising to more then one in three among 16-54s. 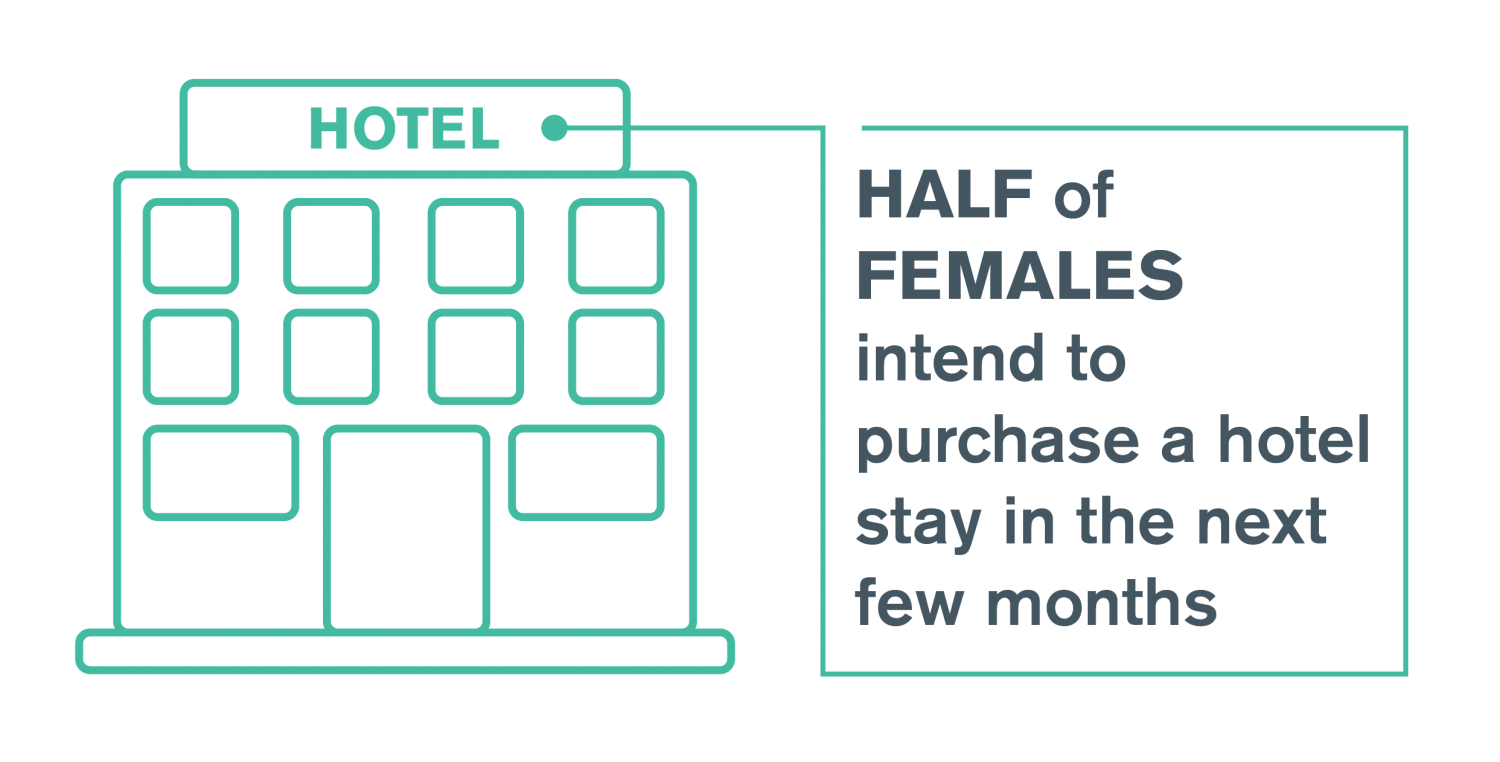 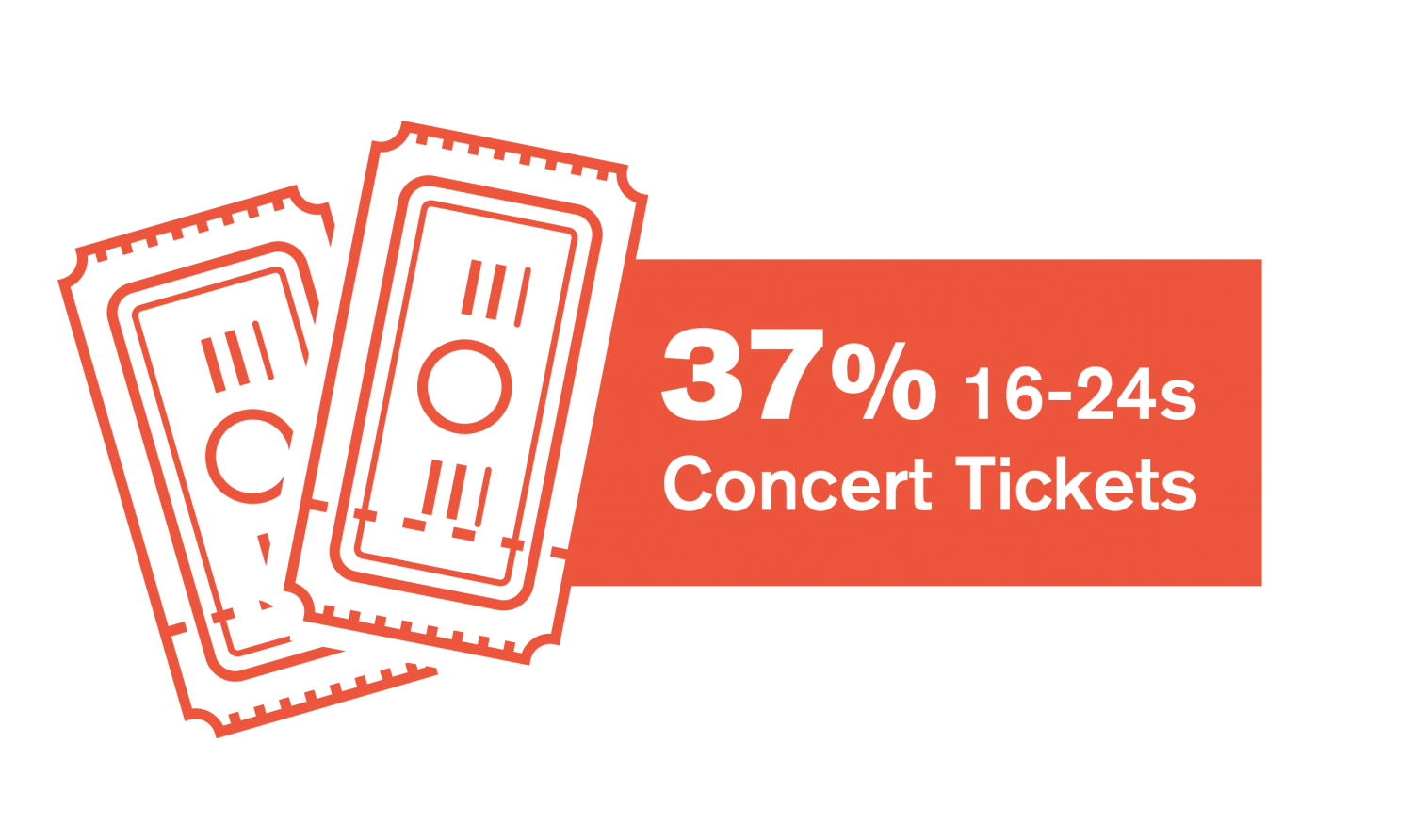 Females appear more excited about seeing live music again with 43% of 16-24 year old women intent on getting a ticket compared 31% of males the same age and 19% of males overall. One of the few areas that males are more likely to be making a purchase than females is on sporting events – 18% v 15%.

We’ve probably spent more time at home than ever over the past year, so its perhaps no surprise that respondents are intending to make some changes in the weeks and months ahead.

20% of those in the 45+ age group will be making an investment in furniture for their homes, a similar figure is also recorded for the 35-44 group (21%). No significant difference among genders here. 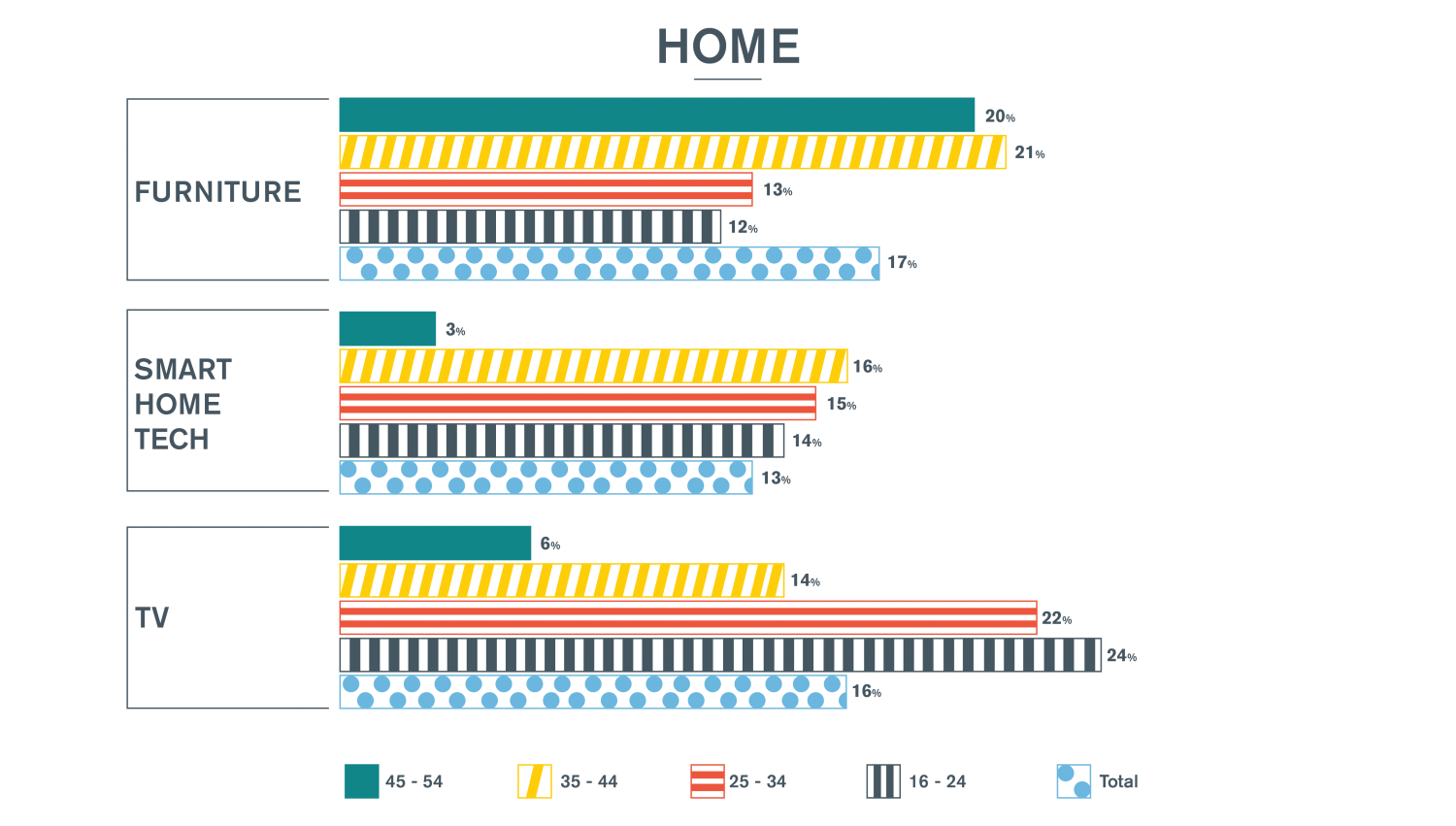 Smart home tech such as Alexa and Google Home are gradually becoming more a part of domestic life and a purchase in this category will be on the agenda for more than one in ten Dubliners. This rises to one in four males in the AB social class.

Next week we will focus on the remaining two categories, Personal Tech and Clothing & Accessories. 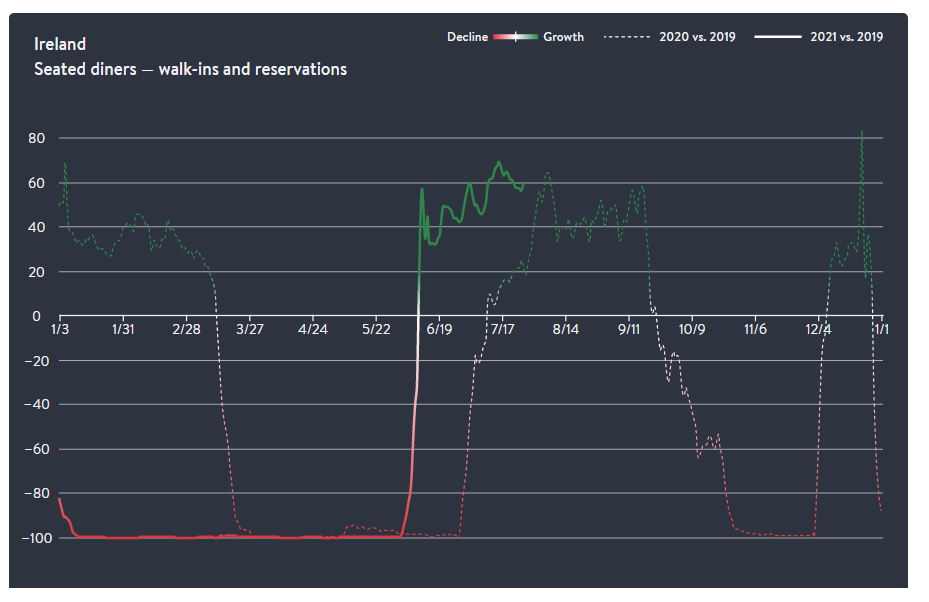 With indoor hospitality open again, we can expect a further influx of customers to bars and restaurants in the coming weeks. This will in turn boost audience numbers in our towns and cities at night and weekends. The chart above from OpenTable certainly shows there’s an appetite among Irish people for hospitality again with the figures reflecting increases on 2019 numbers, since the reopening of outdoor dining last month. Customers of bars, restaurants, theatres, and cinemas are all extremely well served by OOH in their vicinity and on journeys from suburbia to town.