It was a big week for Ireland with the lifting of Level 5 restrictions and many sectors opening back up after a lengthy period of closure.

Within hours of reopening, images and articles circulated showing queues forming as shoppers were gripped with excitement and anticipation to return to in-store shopping. Some retailers even extended their opening hours to cope with the expected demand. Penneys opened some of its branches for a 24-hour period while others opened earlier and closed later than usual.

As retailers greeted customers for the first time in six weeks, many reported a steady flow of shoppers visiting city centres and shopping malls across the country.

Retail Ireland estimates that €1.2bn will be spent in retail outlets in December which is over and above a normal month spend. While Dublin Town expects around two-thirds of the footfall of last year between now and Christmas.

With the reopening of cafés, restaurants and gastro pubs today, the weekend is likely to lead to another increase in visitors to cities and town centres, driven by people eager to enjoy the Christmas period – whether that’s shopping in-store, taking in the Christmas lights or eating out. 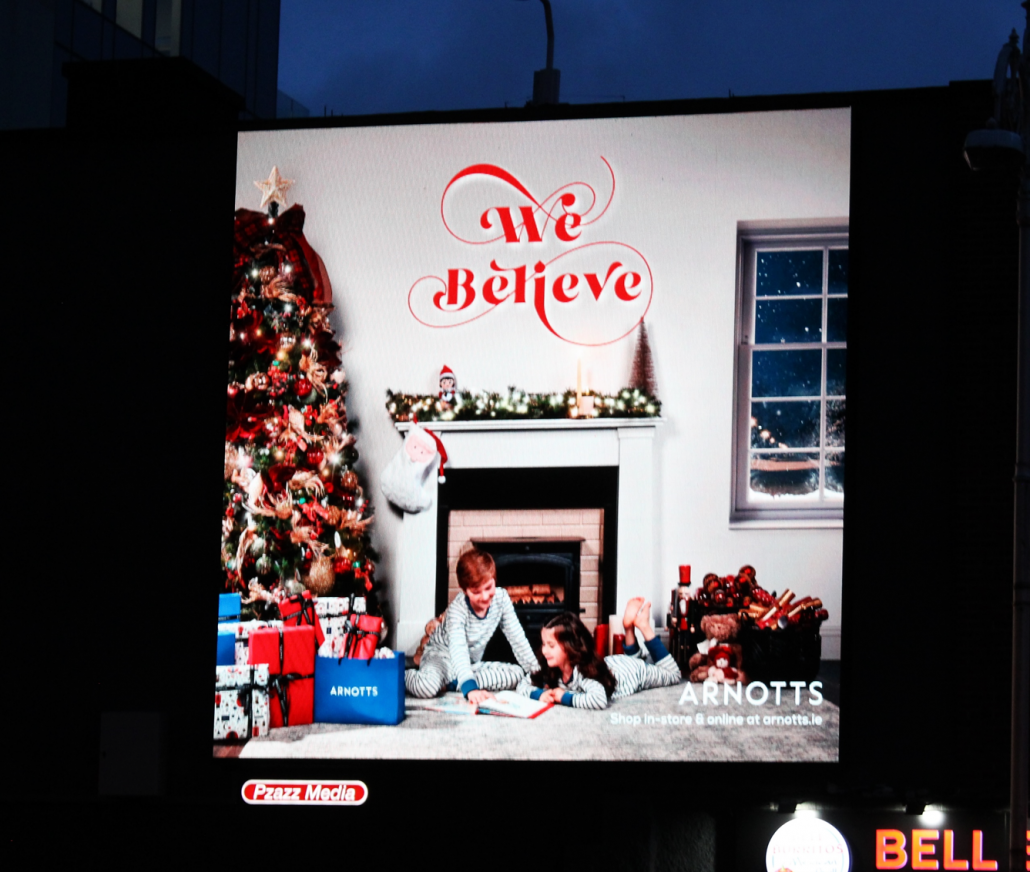 Dublin’s Congestion just 13% off 2019 Levels – highest since onset of pandemic.

The TomTom Traffic Index provides detailed insights on live and historic road congestion levels in cities around the world. At 47%, the congestion level in Dublin both this Wednesday and Thursday 2nd and 3rd December means this week is in line to be the highest recorded since the arrival of the pandemic. A 47% congestion level means that a 30-minute trip will take 47% more time than it would during Dublin’s baseline uncongested conditions. It rose by over a quarter in seven days and now stands at 87% of the standard daily congestion level in 2019.  At 7pm on Thursday 3rd Dec, TomTom reported 162 traffic jams in the capital extending to a total length of over 80km.

The graph below illustrates the return of the rush hour(s) with spikes in congestion levels increasingly evident across weekday mornings and evenings.

Elsewhere, congestion levels in Cork also rose by over a third in the past 7 days and is 2% up on last year while in Limerick, congestion increased by 30% over the last week and is now 26% higher than the standard daily level in 2019.

TII’s latest traffic trend information is generated from a sample of ten traffic counters located on the national road network.

A +8% weekly increase overall in volumes was reported on Thursday 3rd December and stand at 80% of the same day last year. The car traffic figures, generally, show significant increases in volumes as compared with Thursday 26th November, continuing the trend evident on Tuesday and Wednesday following the lifting of Level 5 restrictions. Overall across a majority of the traffic counters, volumes this morning are above the levels experienced before the implementation of Level 3 restrictions on 5th October. 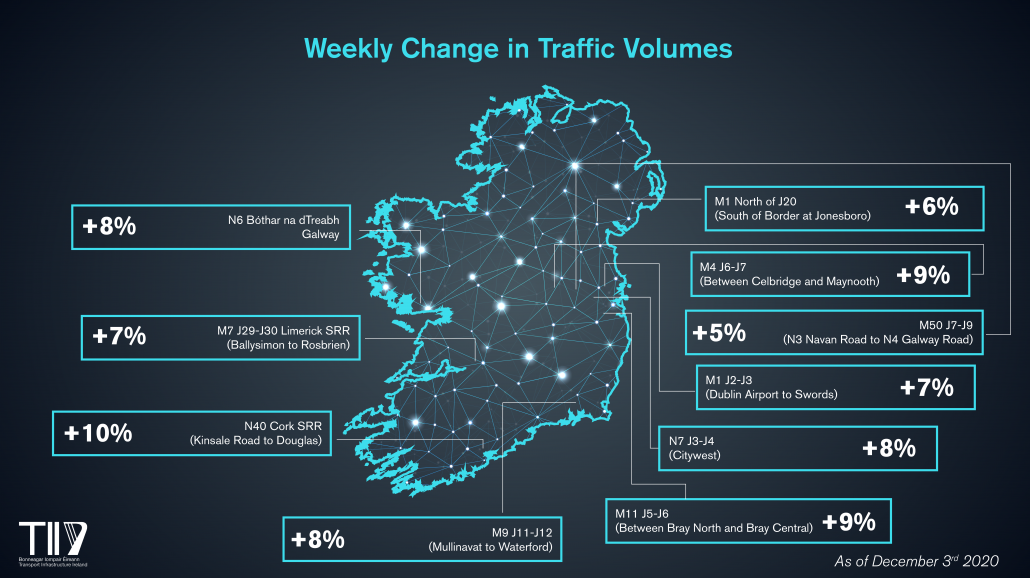 Car traffic volumes on the radial routes into Dublin show substantial increases as compared with Thursday of last week. Car traffic was up +8% on the N7 at Citywest, +7% on the M1 at Swords to Airport, +9% on the M11 at Bray and +9% on the M4 at Celbridge-Maynooth.

In the case of the regional cities there were significant increases in car traffic volumes this morning as compared with Thursday 26th November. The traffic volume changes were as follows: M9 Waterford +8%, N6 Bóthar na dTreabh Galway +8%, N40 Cork +10%, and M7 Limerick +7%. 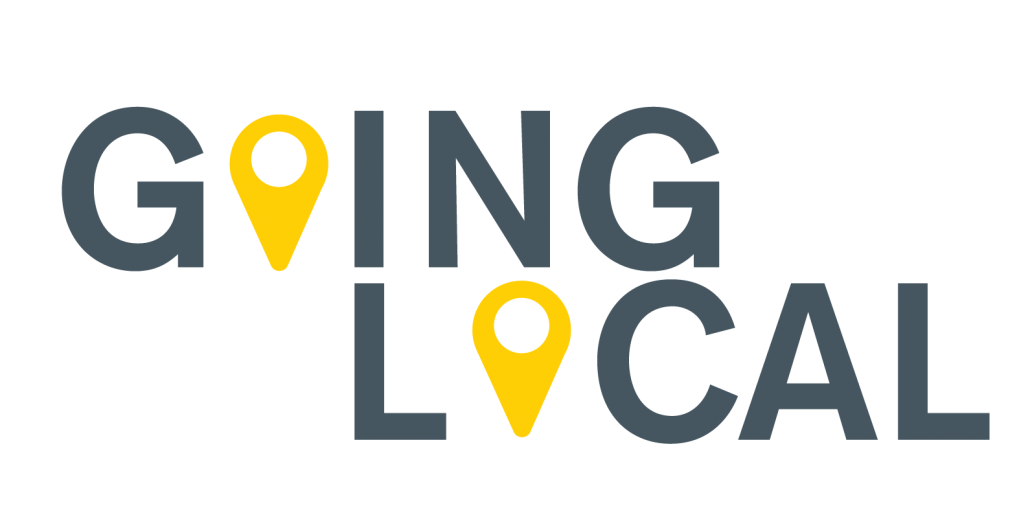 Last week we shared the first wave of results from our Going Local research, conducted in conjunction with IpsosMRBI. It showed the efficacy of local OOH advertising and how posters, buses and screens are proving highly effective despite obvious changes in audience behaviour in 2020. Today we are releasing the second and final set of results from the study, focusing on consumer attitudes and intentions towards local business and the buy Irish agenda. 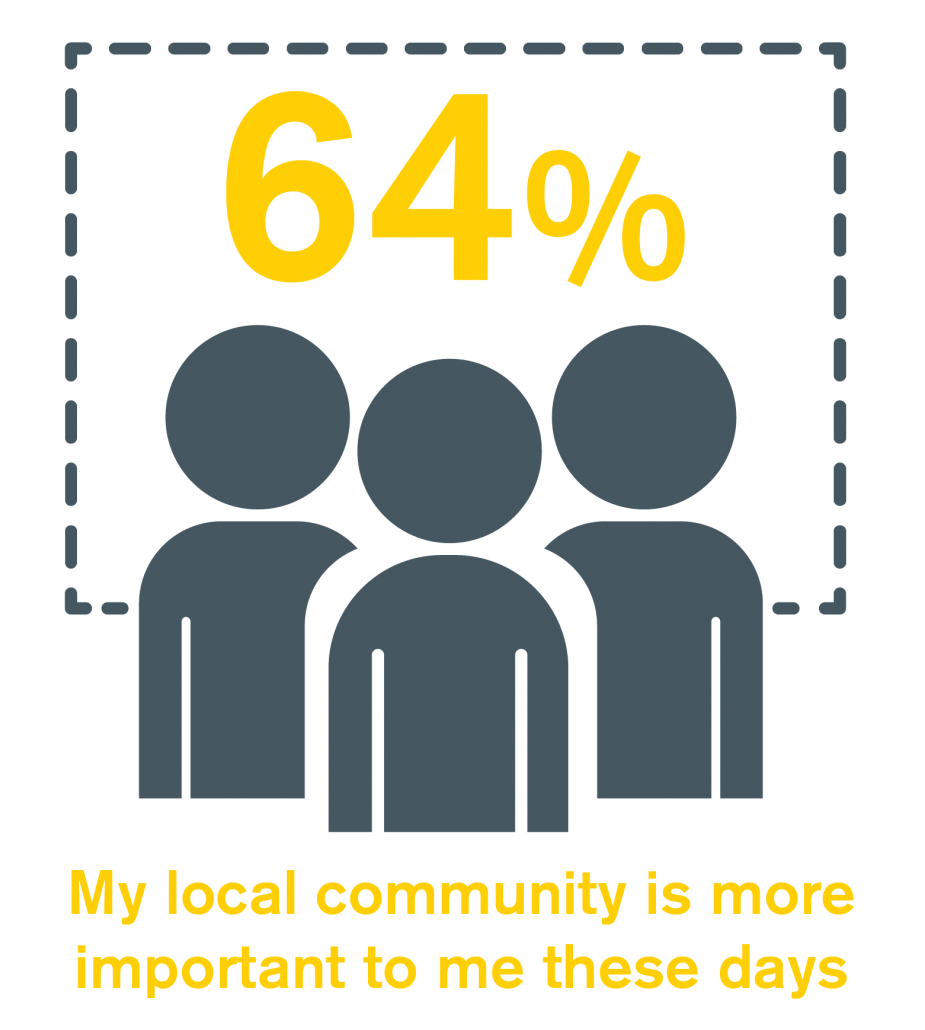 Almost two thirds of the respondents feel that their local community is more important to them these days. That in turn feeds into topics such as where and how they spend their money. 73% of the 300 respondents feel a responsibility to spend money to support local businesses in their areas. This rises to 80% among females and is highest among the 35+ age group, at 76%.

Interestingly, this sense appears to be stronger among residents on the northside of the city, at 78%.

After a torrid year for retailers, our sample of 16-54 year olds also feel a responsibility to buy Irish. Almost 70% will buy Irish options where possible. This is also higher among females, at 74% and peaks at 84% among the 45+ age group.

As we saw last week, 72% of adults agree that they pay more attention to what is happening in their local area these days, rising to 84% among 45-54 year olds. Couple this with the fact that 64% believe OOH posters and screens are an important public noticeboard for new information and you have a potent local communications vehicle. 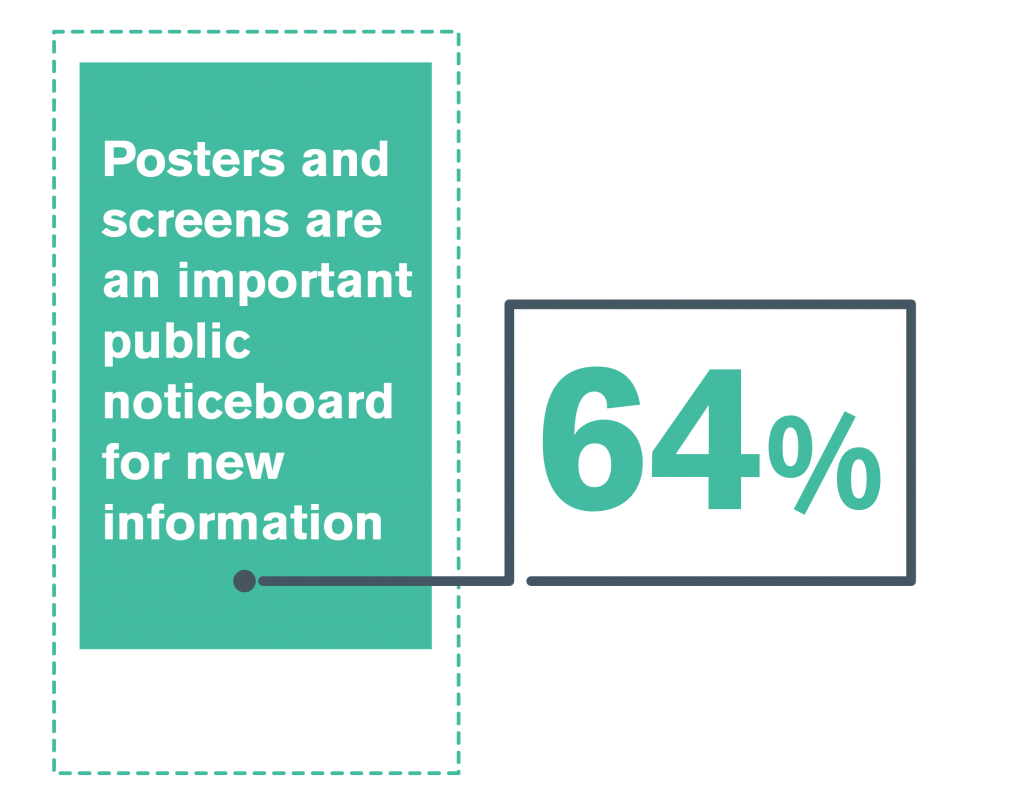 As we emerge from Level 5 restrictions and look towards 2021 with renewed optimism, OOH advertisers can also do so with confidence that their messages are impacting audiences in cities, towns and villages across the country. Going Local has proven this.

Our research findings are also reflected in the recent amárach research publication, Recovery, Relapse or Reset?. The slide below featuring some outcomes of the research point to the contention from amárach that the future is local. 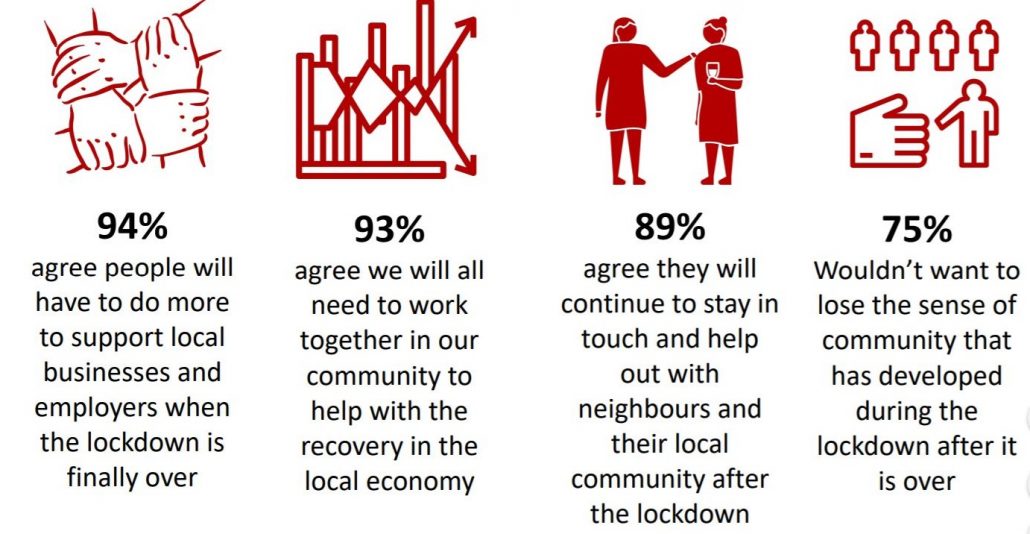 A full deck on Going Local is available from your PML Group representative.

Another new study on life during the pandemic was published this week. According to the report, by DHR Communications and amárach research, 70% of Irish adults have taken up a new interest during the past six months.  Spending time outdoors topped the poll. The period surveyed saw generally good weather and an opportunity to meet with friends and family in the open air, in a more public health compliant manner.

Among the nationally representative sample of 1,149 people, 47% have spent more time outdoors than before i.e walking, running etc.. According to DHR “with the availability of certain leisure activities – such as international travel and in-person socialising – greatly reduced, as well a much increased number of adults out of work, Irish people discovered a variety of new interests and activities with which to fill their time during the last six months”. 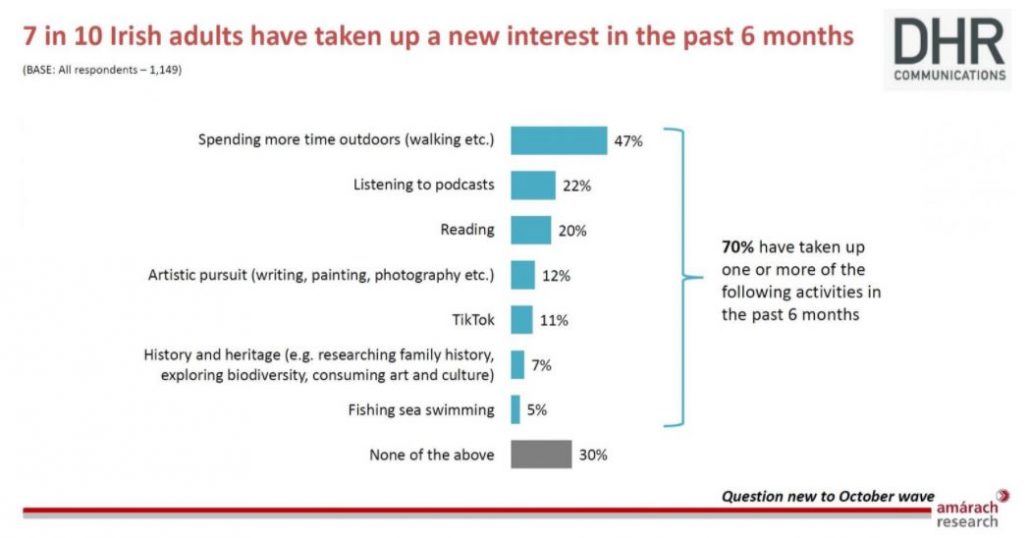 With positive and potentially game changing news in recent weeks about various vaccines for COVID-19, there is a real sense of optimism that our social lives can experience some degree of a renaissance in 2021. B&A’s fifth report of their Shaping Ireland’s Future series explores the arena of arts and entertainment. According to their findings, there is pent-up demand for live events when they are able to recommence with 53% of the population keen to attend a concert and 41% keen to go to a play. More than half miss the ability of the arts to ‘take us away from our day to day lives’. 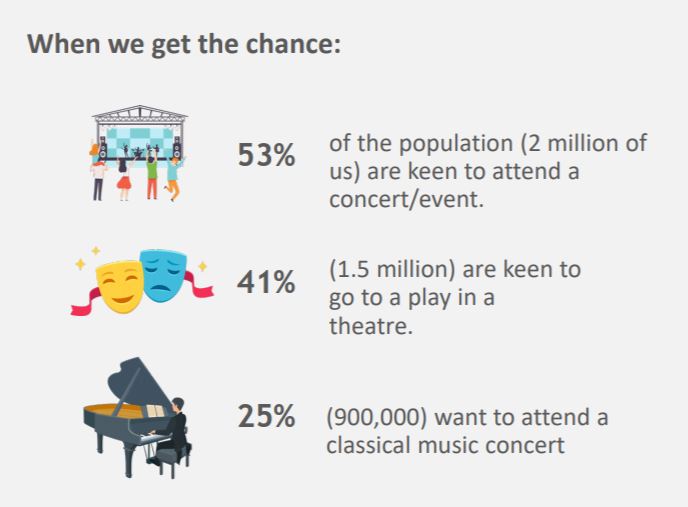 The report highlights the ‘stop gap’ of live streaming, more than half of respondents feel that streaming lack the buzz generated from a shared experience. 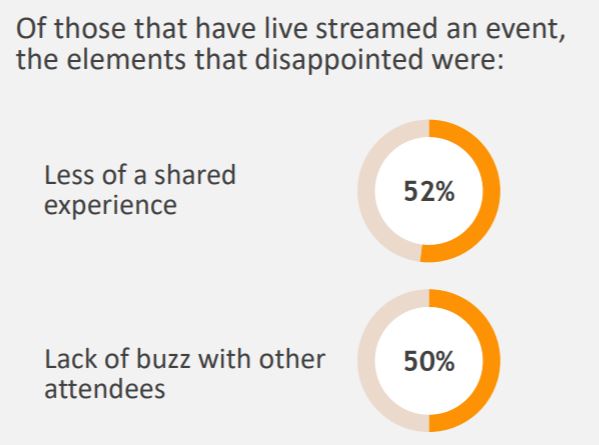 In order to get back to live events sooner, many are willing to accept reduced capacity and 80% are willing to wear a mask when attending a live performance.

A Nation’s Lifestyle Under Restrictions

The CSO has published the latest wave of its well-being and lifestyle survey to measure the impact COVID-19 had has on Irish society in November.

Nearly 45% of respondents reported that something in their lives has changed for the better since the onset of the COVID-19 crisis.

Almost three in ten (28.7%) reported more quality time with the people they live with as an aspect of their lives that has changed for the better. Nearly 19% of respondents said their finances have improved and 14.5% have more free time for hobbies. Workers reported a better work-life balance (18%) and less time commuting (19%) as aspects of their life that have improved.

More than four in ten respondents said that their consumption of junk food and sweets had increased. 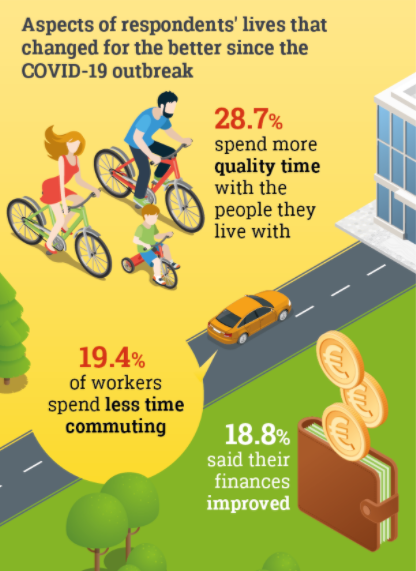 Interestingly, one in four prefer to go shopping alone while only 43% bring a shopping list. Nearly half are looking for inspiration while out shopping and again almost half (41%) see grocery shopping as a way of getting out of the house.

These insights present a huge opportunity for advertisers to capture shoppers’ attention at a time when they are focused, alert and free from distraction. Brands can leverage this key OOH environment with brand switching and impulse messaging to influence consumers on the path to purchase and throughout the store. 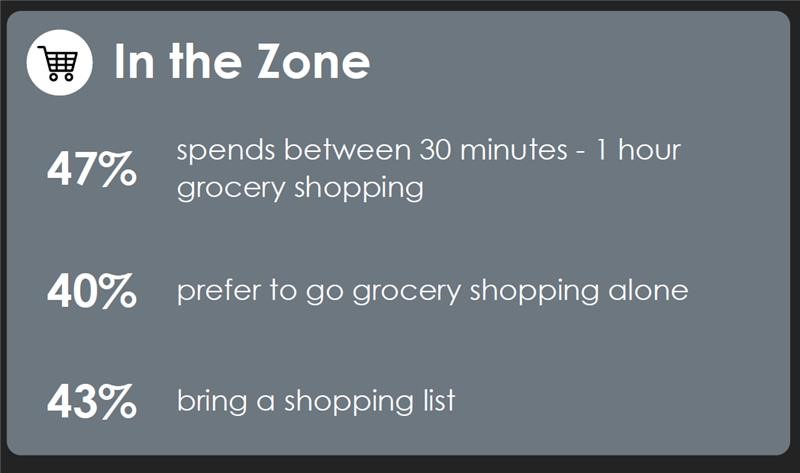 The regeneration of OOH infrastructure has continued apace in 2020 and this week saw an exciting development for advertisers in the heart of Dublin city. JCDecaux unveiled the first of seven new Digishelters, designed by Philip Cox, on O’Connell street and Westmoreland Street.

This is the first time these high-profile city centre streets will have bus shelters, providing commuters with protection from the elements within an attractive, high spec design that also incorporates 86” 4k ultra HD digital advertising screens – offering clients further opportunities to reach audiences in the centre of the capital.  These new units will bring JCDecaux’s digital roadside footprint in Dublin, which includes Digishelters, Digipanels and Digipoles, to 134 premium screens. 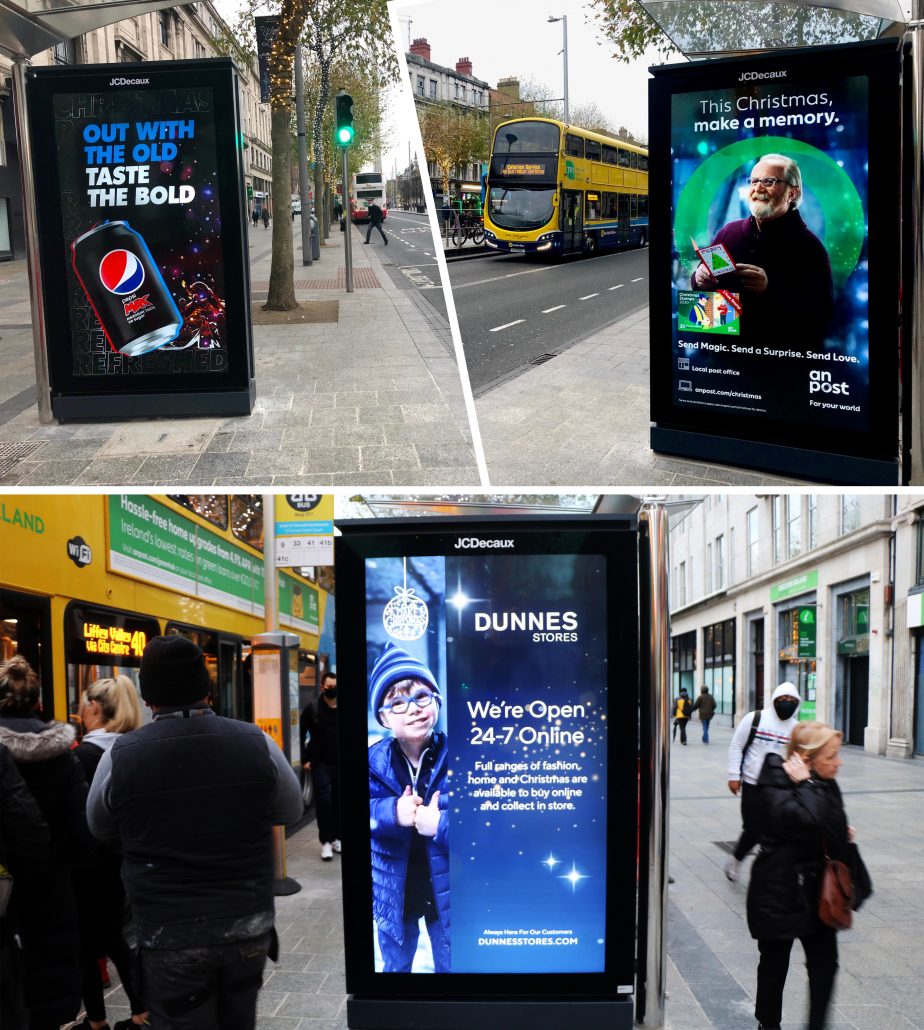 Diageo Employs the Power of OOH for Leading Brand Campaigns