The TomTom Traffic Index reports that congestion levels in Dublin across Mon-Thur has increased from 23% to 30% in the past four weeks. A 30% congestion level means that a 30-minute trip will take 30% more time than it would during Dublin’s baseline uncongested conditions.

National Morning Car Traffic up 21% in past Month

TII’s latest traffic trend information for Thursday 25th March, generated from a sample of ten traffic counters located on the national road network, reports a +21% monthly increase in volumes. Traffic is a third down on what it was in 2019 but 49% higher than March last year when the severe 2km lockdown was in place. Volumes have recovered to 86% of what they were prior to the introduction of Level 3 restrictions on 7th October last.

The chart below visualises the latest data from Google’s Community Mobility Reports, showing how the number of visitors to grocery and pharmacy stores has changed to last Friday relative to the period before the pandemic. 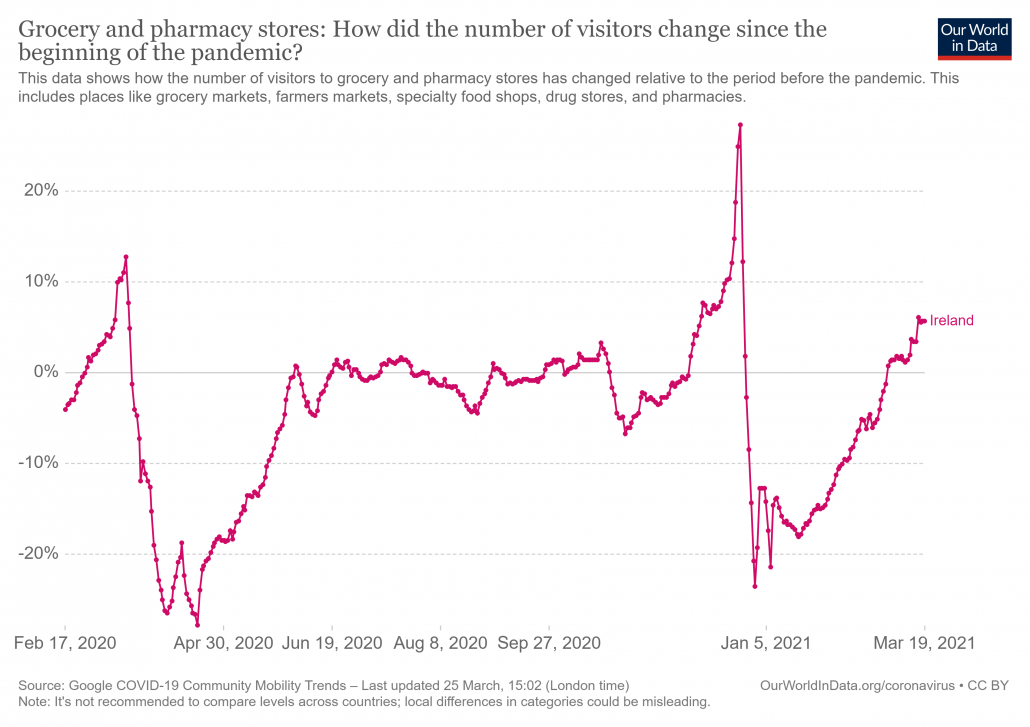 The positive metric for supermarkets and pharmacies is also evident with parks as the recent clement weather has encouraged local leisure moments. 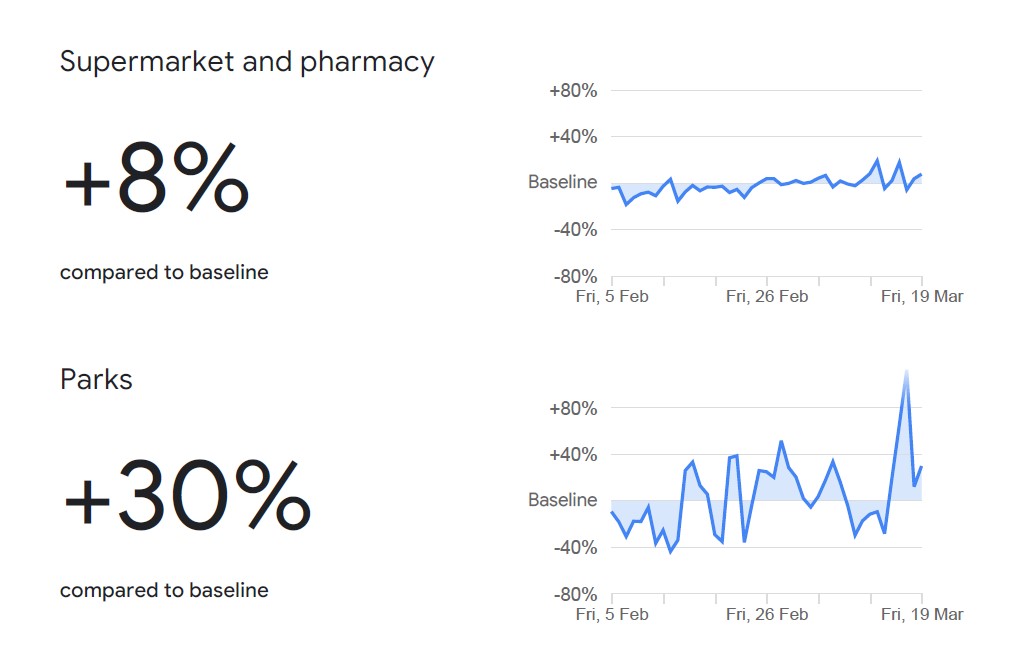 Last week we published an extensive piece on the effectiveness of OOH in building mental availability and driving response in consumers. The piece also referenced UK research called The Last Window of Influence. The study of more than 600 respondents established OOH as the key medium to reach shoppers in the crucial thirty minutes prior to purchase. As the shopping basket increased in size and value over the past year, that influence is more important than ever.

New data we’re publishing here this week – part of our iQ research programme – confirms the power of OOH advertising to influence consumers at key decision-making moments. Almost two thirds of all respondents agree that ads in or around the supermarket helps them choose between the brands on offer. This rises to 82% among the 16-24 age group and is more than 60% for everyone aged 16-44. Main shoppers register at 65%. 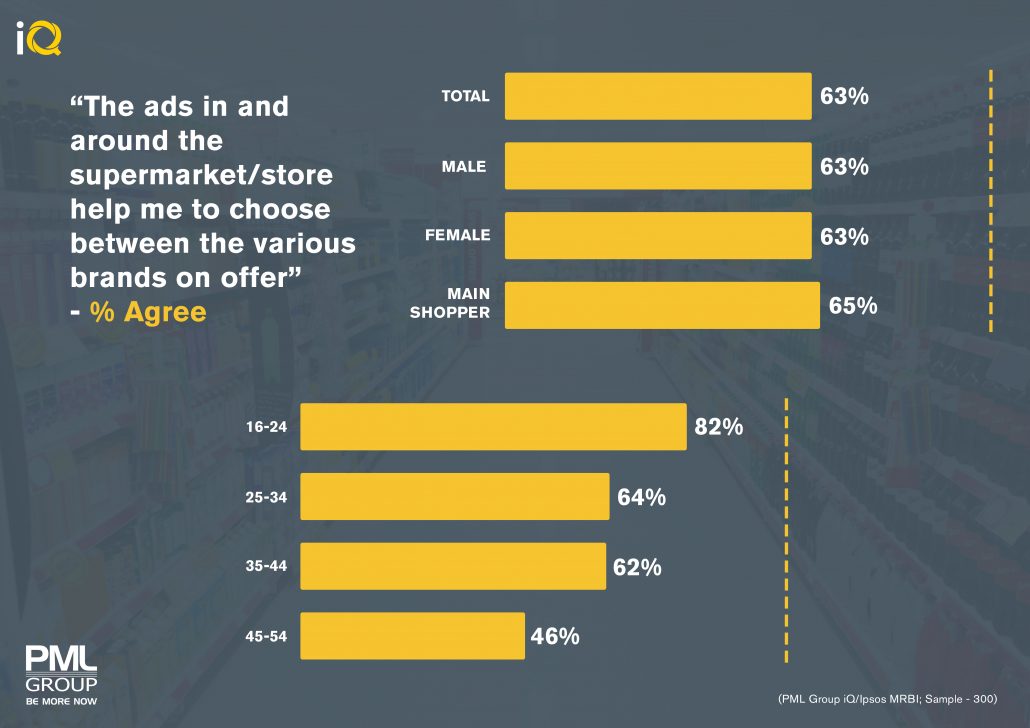 Similarly, respondents are of the opinion that POS advertising provides useful product information that aids their decisions. 61% agree, with females at 66% and males at 55%. 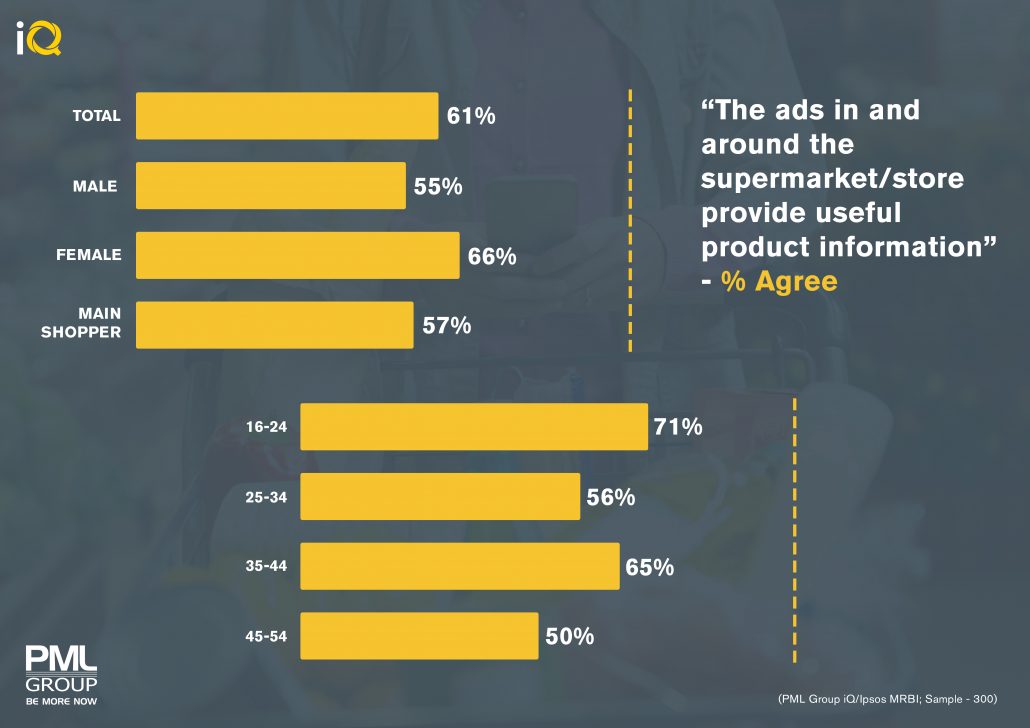 This research adds a layer to our previous React study, which found that one in four adults were likely to respond to an OOH ad of interest by making a purchase in store.

This data brings into sharp focus the role OOH should play for brands with the second busiest holiday of the year, Easter, just around the corner. 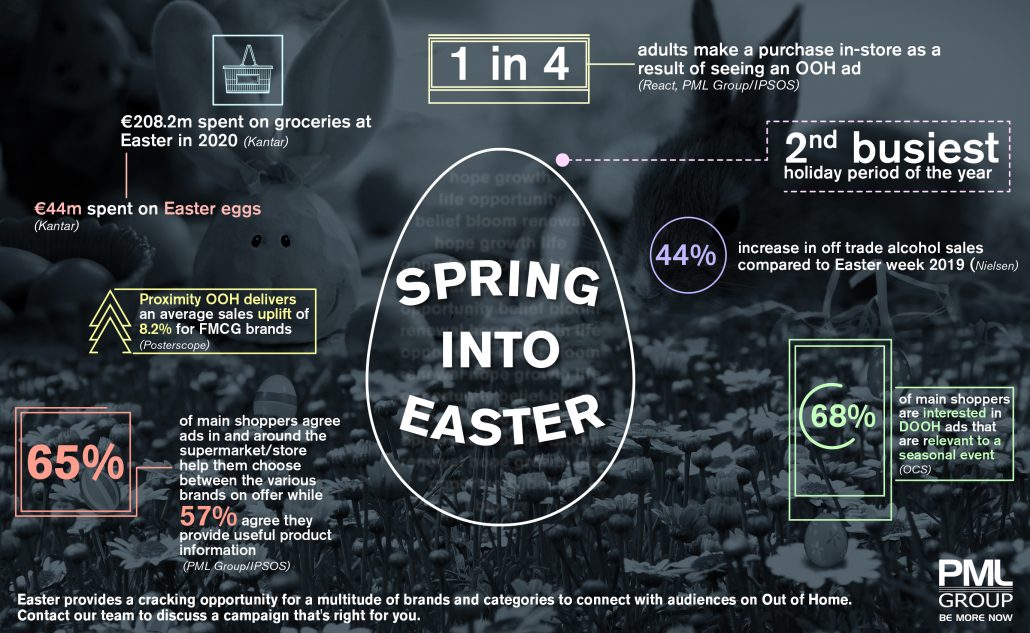 Over 60% of people are interested in holidaying in Ireland this year, provided it is safe to do so, according to new research from Core.

With summer fast approaching, Core’s Tourism 2021 report looks at the public’s expectations and intentions towards holidaying in Ireland this year. The research revealed that 4% of adults have already booked a holiday in Ireland, while over half (51%) intend to book, but will decide at a later date. The majority of people are planning to book their holidays based on a specific month, notably June onwards.

Of those who plan on taking a holiday this year, 59% intend to choose holidays which involves more time outdoors.  Over half (55%) of holiday planners hope that they get to spend time with extended family. One in two holiday planners would prefer to visit a destination they are familiar with, rather than a new destination. 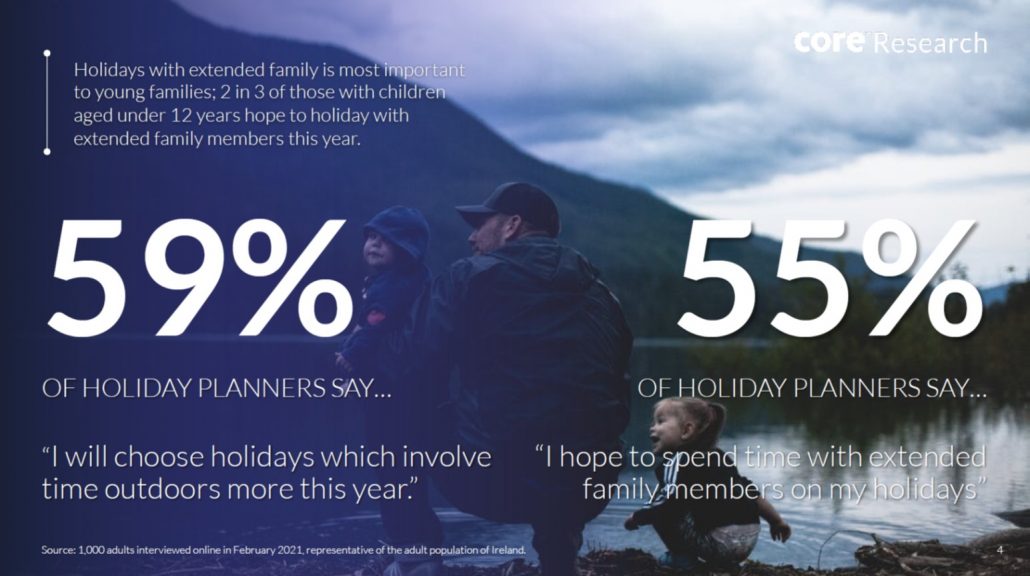 Anecdotally, news articles have testified to the upcoming staycation boom with hoteliers and other accommodation venues reporting an uplift in bookings in recent weeks.

Family insights company ParentsandBrands have highlighted how parents plan to book a family hotel stay. Of those surveyed 27% go directly to their hotel of choice to try and get the best rate. Two in ten parents look for the cheapest booking option they can find while one in ten always book on the hotel website.

For most holiday planners, booking accommodation and tourist activities are completed through an online service. Building on mental availability and communicating with an in-market audience, tourist venues can capitalise on OOH’s abilities to action consumers. OOH is a particularly valuable research and online driver. Our recent React study indicates a strong link between OOH and online actions. The study found almost half of adults (46%) are likely to go online to find out more about a product after seeing an OOH ad while females are much more likely to take this action (54%).

DLRCC’s Coastal Mobility Route has established itself as an attractive leisure route since its inception last year.

Published counters from DLRCC for last week shows the route, which was created to provide safer and improved facilities for walking and cycling, recorded its busiest week yet. The council observed 22,166 cyclists (at Seapoint) and a further 30,217 pedestrians at the People’s Park/East Pier counter.

Contributing to the sizeable figures was the return of more school students and the mid-week bank holiday for St. Patrick’s Day.

An estimated 65.7% of the population stayed local during the week ending 12 March 2021 according to the Staying Local Indicator (SLI) from the CSO, a slight increase on the previous week’s figures.

Reflecting its urbanisation and easier access to amenities and services, Dublin continues to be the county with the highest percentage of the population staying local (80%). The counties with the lowest rates of people staying local were Carlow (50.5 per cent) and Mayo (51.1 per cent). 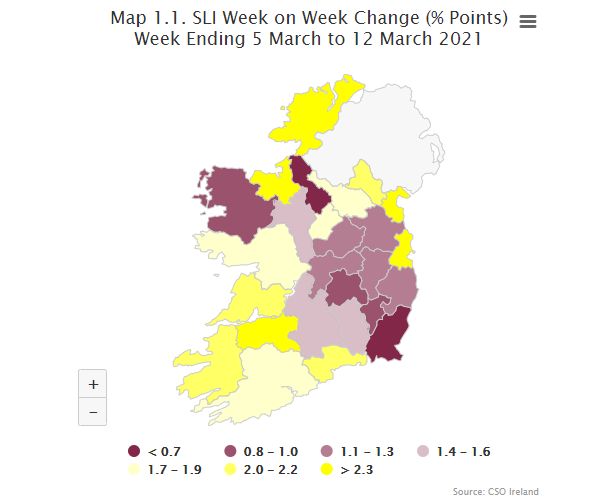 As we continued to stay closer to home while travel restrictions are still in place, OOH can play a pivotal role in connecting with audiences in a local setting. Our Going Local research found almost three quarters (72%) of adults pay more attention to what is happening in their local area these days, peaking at 84% among 45-54 year olds.

With the research demonstrating how people are more tuned in and attentive to their surroundings, this has had a positive effect on OOH noticeability with 65% of adults agreeing they are more likely to notice OOH posters and screens as the go about their local area. More than 6 in 10 (64%) believe Outdoor ads are a part of the everyday fabric of a local area.

What do consumers actually want from ads?

In its latest Zeitgeist study, GWI surveyed over 4,000 consumers in the US and UK to find out what they want, and sometimes as importantly, don’t want from advertising.

Key to any advertising campaign is zeroing in on your target audience. And, more often than not, this is drawn along generational lines. What consumers look for in an ad is heavily dependent on their age. Gen Z are found to be the most demanding. 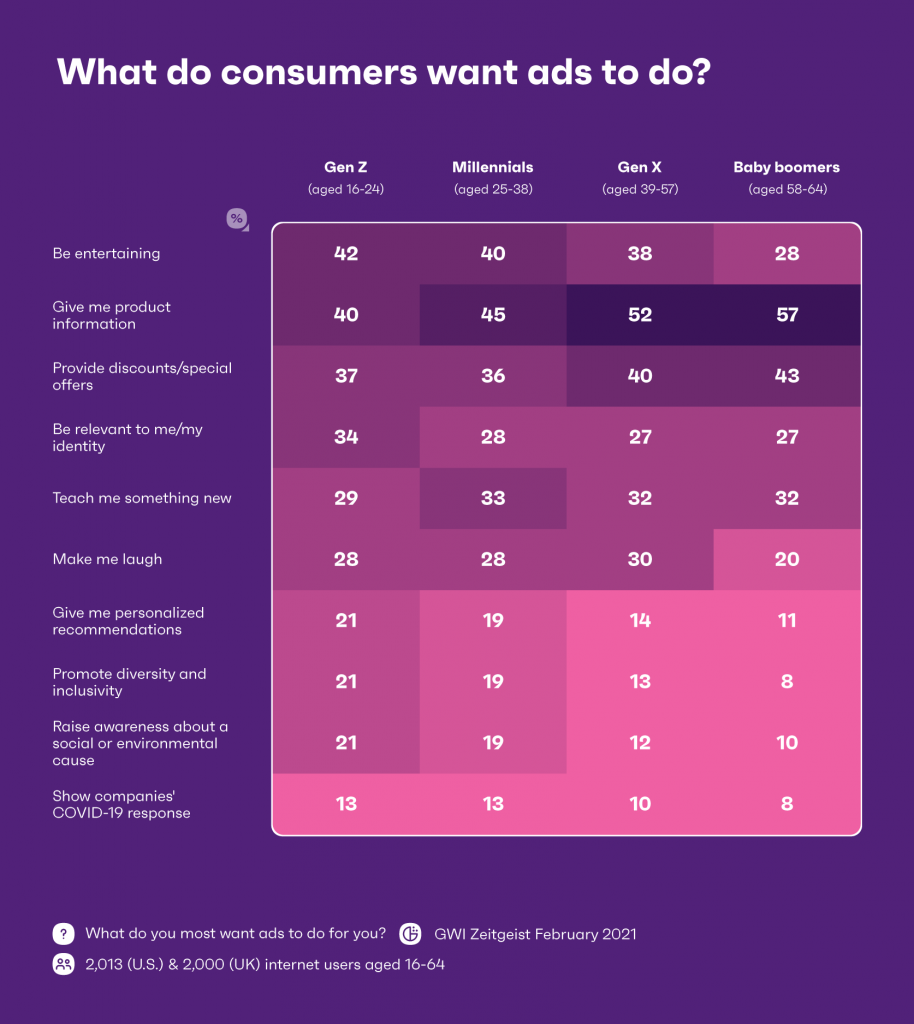 All in all, younger consumers have a more diverse list of expectations when it comes to advertising. Most notably, they show signs of wanting to connect with an ad on an emotional level.

Their older counterparts on the other hand, are drawn to the functional, more tangible, benefits of ads.

And Gen Z’s demands don’t stop there. This generation is driving the call for ads to promote social and environmental causes.

Over a third of Gen Z want ads to be relevant to their identity, key to that is brands being authentic and staying true to their promises.

Ads need to be more relevant

For brands, getting advertising right is an ongoing battle for perfection, but they also need to ensure they manage against getting it wrong as well.

Ultimately, producing too many ads can be very damaging for a brand. Instead, they should focus on appealing to consumer expectations rather than bombarding them with unwanted clutter that’s unlikely to pique their interest. 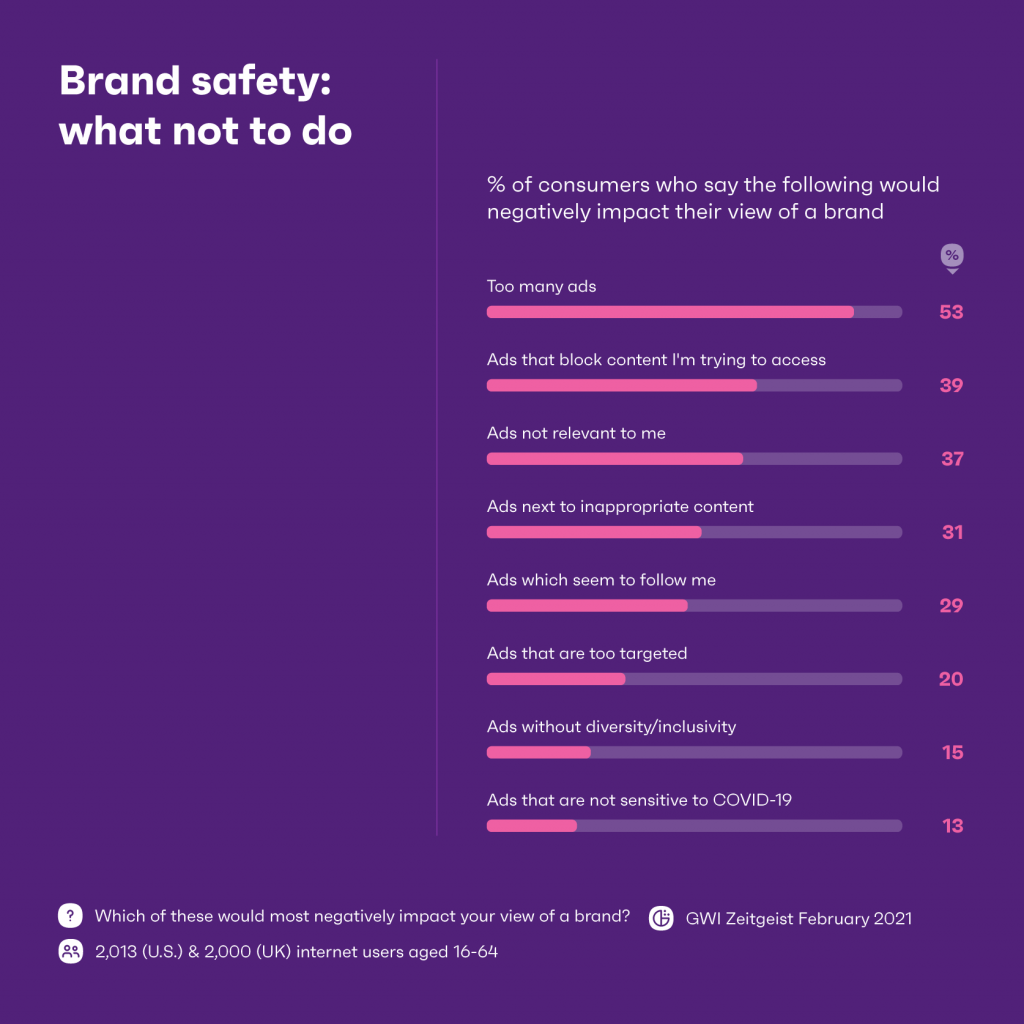 New UK Research Points to the Value of Trust

The top qualities that today’s consumers are demanding from brands in the post-pandemic era have been revealed by Clear Channel UK and JCDecaux UK, as they launch the findings of their new consumer confidence survey.

The research, which involved 1,000 UK consumers, reveals that the top three brand qualities to build trust with UK consumers are product quality (76%), value for price (72%) and transparency (62%). Whilst eco-friendly practices ride high on the national agenda, it’s interesting to see that social responsibility (56.39%) and environmental sustainability (56.27%) sit further down the list than expected, at 10 and 11 respectively.

81% of consumers said trust is a deciding factor in their buying decision. These findings are particularly timely to help brands understand what consumers are asking for and double-down their efforts in delivering quality products and services that are value for money.

Across several sectors, the survey showed a clear correlation between trust and level of consumer engagement – with significant uplift in engagement when the brand was deemed trustworthy. Consumers are 30% more likely to engage with luxury goods and automotive brands they trust, and 24% more likely when it comes to travel brands.

The research also suggests that brands really need to consider their advertising spend, and think carefully about how they use influencers and messaging to deliver the best results with consumers:

Clear Channel UK and JCDecaux UK’s consumer trust research follows a period of sustained interest in the OOH medium and its ability to reach audiences at scale. The study tested the hypothesis that the media context in which a communications message is delivered has a significant effect on consumers’ perception of the brand. The study revealed that OOH was most effective at driving perceptions linked strongly to trust such as honesty, reliability, and safety.

It also demonstrated that OOH is considered a generally ethical medium. The survey found that consumers deemed OOH to be the least likely to manipulate people’s opinions, with 9 in 10 agreeing it is not suspicious or intrusive.

Indeed, the research reflects a PML Group iQ from 2019 that showed a majority of Dubliners believe that advertising on billboards make brands more trustworthy. 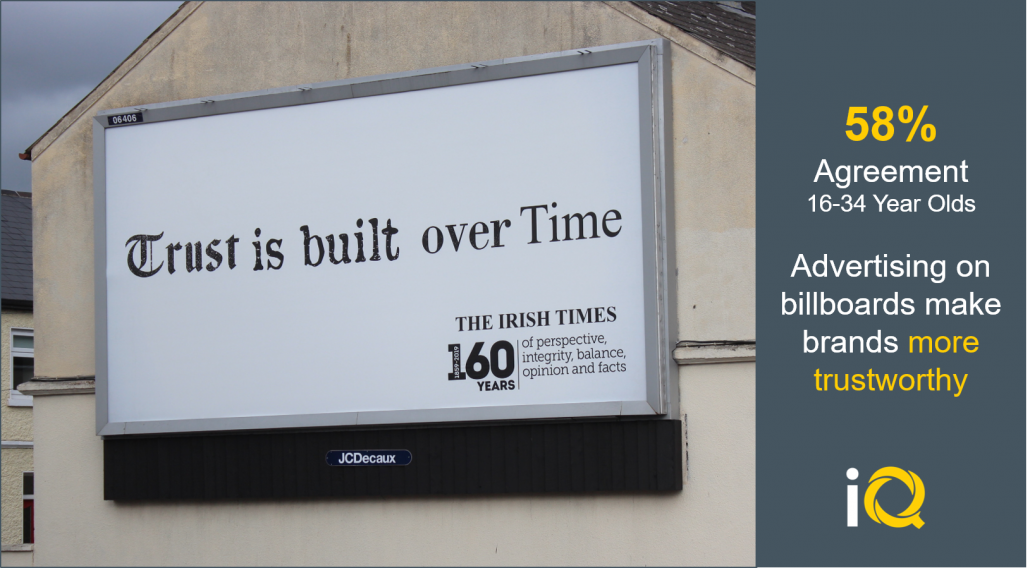