Colum Harmon, marketing director PML Group, with this week’s Out \ Look on Out of Home. 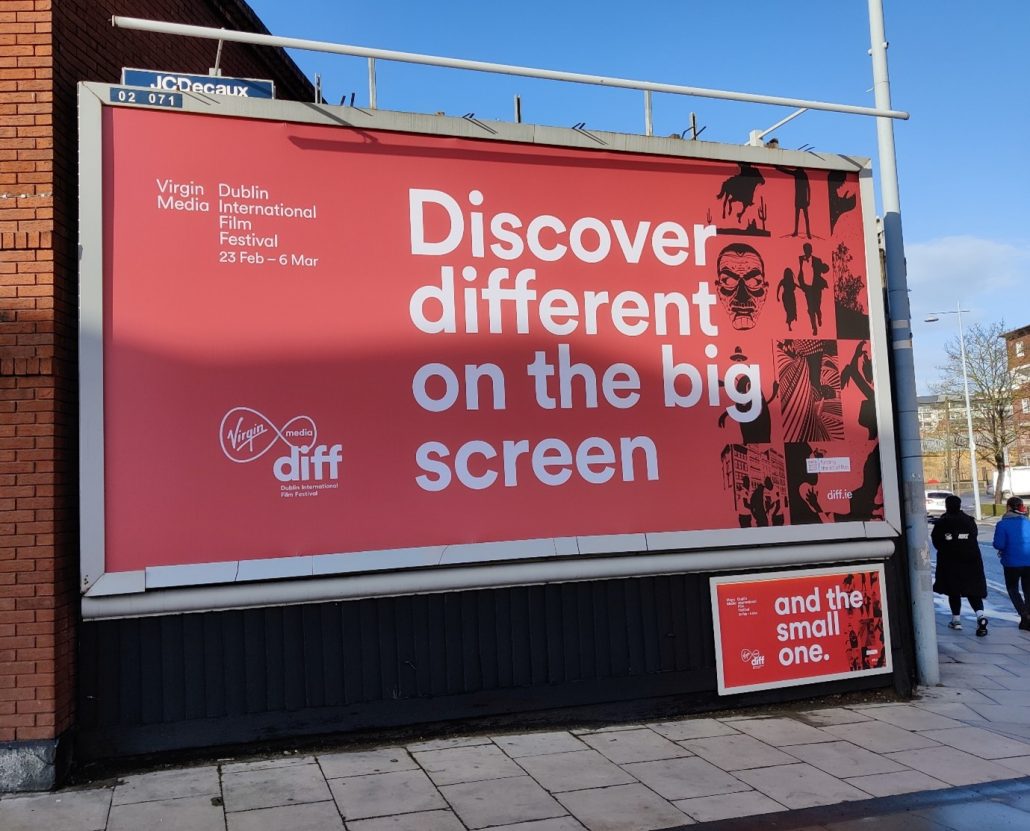 The Virgin Media Dublin International Film Festival returns to the capital on Wednesday, February 23 with quite the roster of events lined up. Returning once again as an in-person series of events “back where it belongs in cinemas”, audiences will be presented with domestic and international feature films, short films and documentaries as well as a host of galas, premieres and special events. This year it’s a hybrid festival, which means that you can catch more than 100 Films from 19 countries in-person AND online.

This year sees the festival in its 20th year and promises a special celebration of all things cinema.

For the OOH campaign, the medium became the message with a big poster-little poster special on Macken Street humourously illustrating the dual viewing options. The campaign, created by Publicis and planned by OMD and PML, is running on digital screens, billboards and bus sides across the capital.

Festival Director Grainne Humphreys said: “I am particularly delighted to premiere the superb line up of new Irish films and show these new works alongside their international counterparts. It’s a festival programme which I am extremely proud of, packed with discoveries and gems.”

Paul Higgins, Vice President of Commercial at Virgin Media Ireland said: “The festival offers a host of movies, international features and shorts, along with celebrity and director Q&As and special events which cinema fans can experience in person or from the comfort of their home.”

Showcasing on perhaps the only screen time allowed for couples that day, Casillero del Diablo utilised DOOH to convey the warmest of feelings at key moments. The campaign, instigated by Javelin and Source out of home, illustrates the potential of the medium in leveraging events in the real world using contextual copy.

More Than 1 in 10 Dubliners went meat-free in January

Studies in recent years have indicated the rise in popularity of veganism and meat-free diets in the Irish population. In 2018, Bord Bia’s Dietary Lifestyles Report found that 4.1% of the population follow a vegan diet and in the same year, Google search trends placed Ireland 8th in the world for searches regarding meat free recipes. It appears that upward trend is continuing, as highlighted in our latest iQ study. 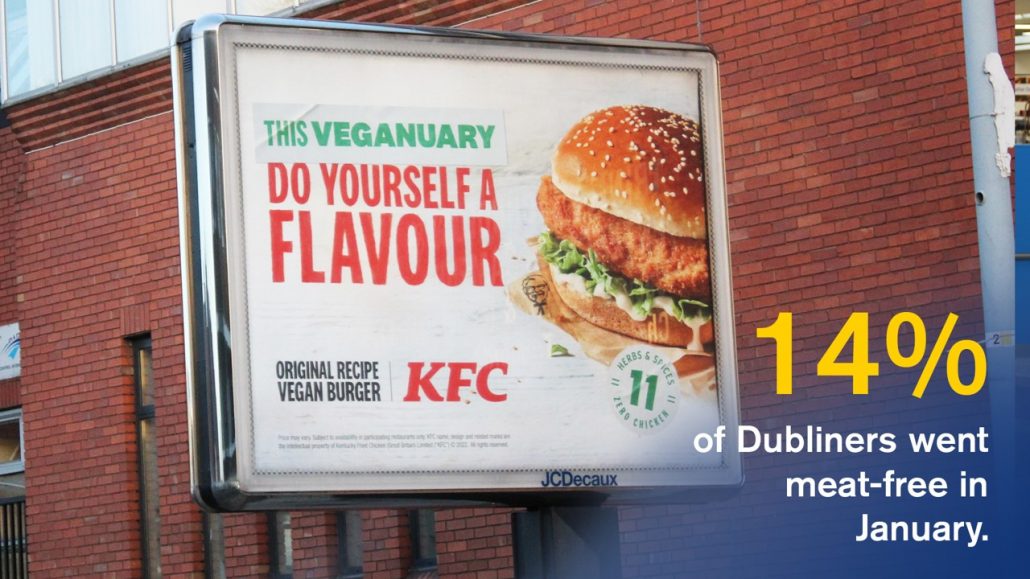 14% of the 300 respondents, aged 16-54, decided to go meat-free in January. For 61% of that group, it was the first time they had done so. That 14% figure remained pretty consistent among genders, social classes and age groups, indicating this shift is not confined to specific generations or classes but rather a more general change among the population.

Another indicative statistic is that 42% of respondents chose to have one or more meat-free days in a week since the start of the year, rising to 47% among females and 54% among females aged 35-54. This would imply a definite desire among Dubliners to eat less meat rather than cut it out completely. 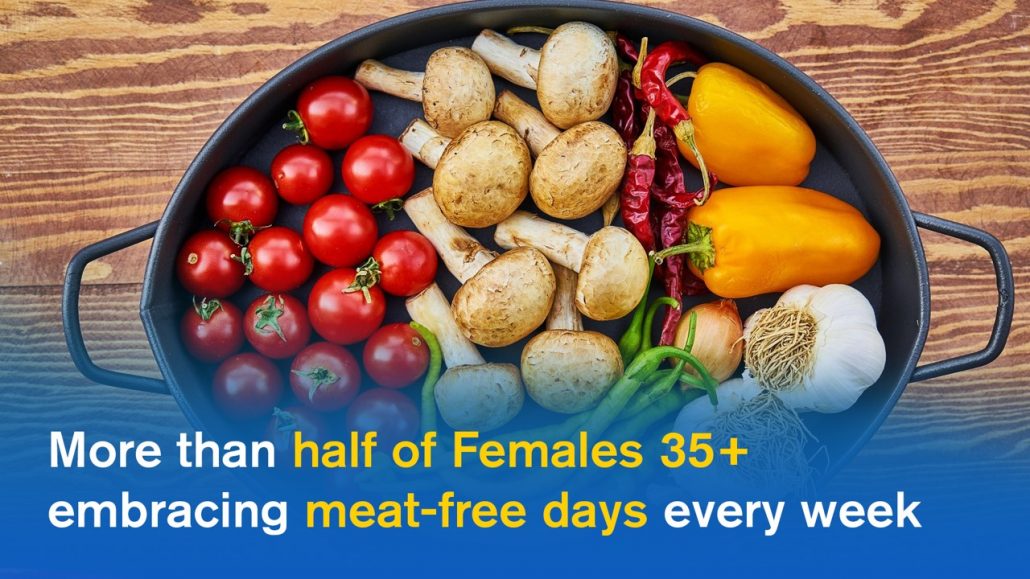 63% of the sample have increased their consumption of fruit and vegetables in January, according to the iQ survey, conducted on our behalf by Ipsos MRBI. A previous study we conducted, the Outdoor Consumer Survey (OCS), shows that food, and what to have for lunch and dinner is often on people’s minds as they commute, exercise and socialise outside of the home. Hence, brands such as McDonald’s, KFC, Denny, Keeling’s and The Happy Pear were all active on OOH in January with meat-free and healthier options, connecting with conscious consumers in retail, transport and social settings.  That’s what makes OOH so effective in these circumstances, communicating with consumers at key decision-making opportunities.

The Central Statistics Office (CSO) has published its latest Transport Bulletin which is compiled using data collected by Transport Infrastructure Ireland, the Road Safety Authority, the National Transport Authority, Dublin City Council, the Office of the Revenue Commissioners and the Department of Transport. 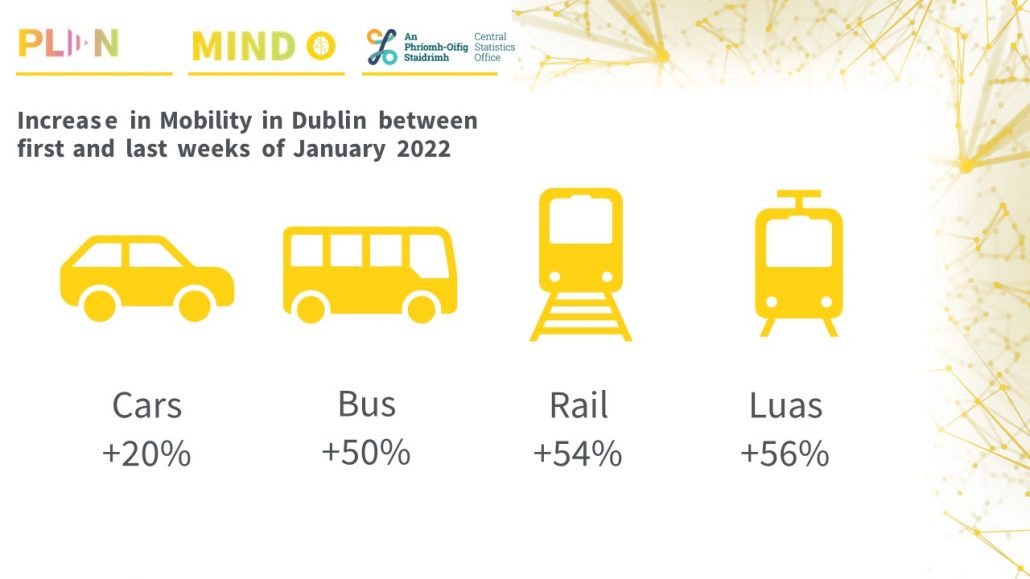 The bulletin shows that in line with the easing of COVID-19 restrictions traffic volumes increased during January 2022. Data for the end of January (week beginning 24 January 2022) show that car traffic volumes in Dublin increased by 19.6% compared with week one of this year. Traffic counts in January were 78% higher than they were in 2020.

The average monthly volume of bicycles at selected Dublin sites during peak hours more than doubled on January 2021 from 30,241 to 61,740.