Colum Harmon, marketing director, with this week’s view from OOH.

In Now Near Next this week we include the second part of our Check/Out study, carried out in conjunction with Ipsos MRBI. We have the latest auto mobility data from Locomizer and TII as well as findings from UK research into the importance of localised marketing. Data from Deloitte and Kantar also speaks to the value of POS advertising.

This week we publish part two of results from Check/Out, a study conducted by PML Group in partnership with Ipsos MRBI, focusing on many aspects of the shopping and home dining experience for Dubliners in 2021. 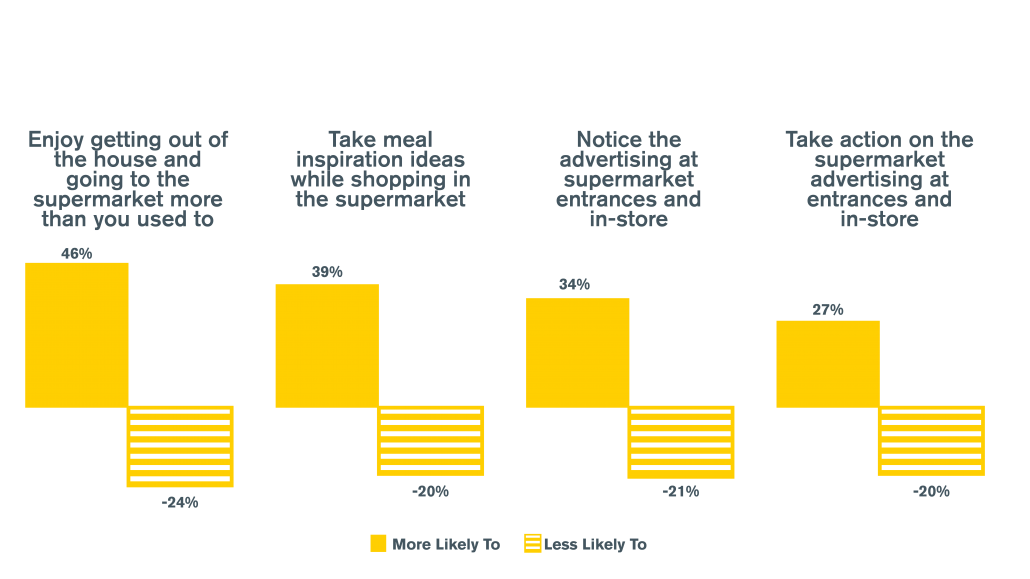 The graphic below gives some more granular data with regard to noticing POS advertising. 37% of main shoppers are more likely to notice this channel of advertising and 48% of 16-24 year olds were of that opinion also.

When it comes to acting on an ad at point of sale, such as making a purchase, the age group most likely to do so are 35-44s while females are more likely to act than males, at 32% v 21%.

We saw last week that home cooking is still high on the agenda for the survey respondents. 52% of females are more likely to plan out the meals they will have at home for the week ahead, while 60% of the 25-44 age group fall into this category. Two thirds of SuperValu customers will be doing more home cooking as will 65% of residents in South Co. Dublin. 42% of 35-44s believe they are more likely to take meal inspiration ideas while shopping at the supermarket in coming months. The figure for main shoppers is 43%. This should put food brands on high alert to the value of this environment in 2021.

The final instalment of our Check/Out research will be published next week.

Locomizer Auto Mobility up 9% in past fortnight

Locomizer mobility data is based on analysis of mobile phone location data via anonymised app reporting. Latest figures (w/e 7th February) show that the auto mobility level in ROI, which is calculated though a combination of mobile users, time, and signals, rose 9% in the past fortnight. 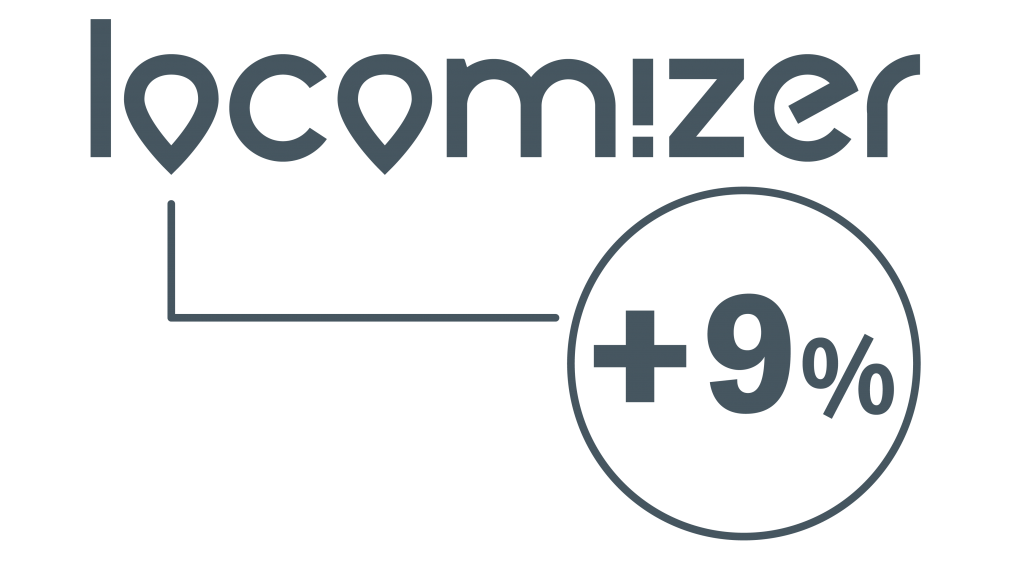 Generally, short term mobility trends in main urban centres have outperformed those in rural areas, with Dublin above average at +22%, as is Cork City (up 37%) and Galway City (up 21%), possibility an indicator of more frequent trips in higher density locales.

For February 10th this week, Transport Infrastructure Ireland (TII) report that, of the fifteen routes they measure, eight have seen increases in traffic volume this week, with two showing no change and five showing small reductions.

So, overall, modest increases in automobility in the country this week.

CMOs are turning their attention to local marketing with 95% of executives seeing the brand advantages of acting at a local level. 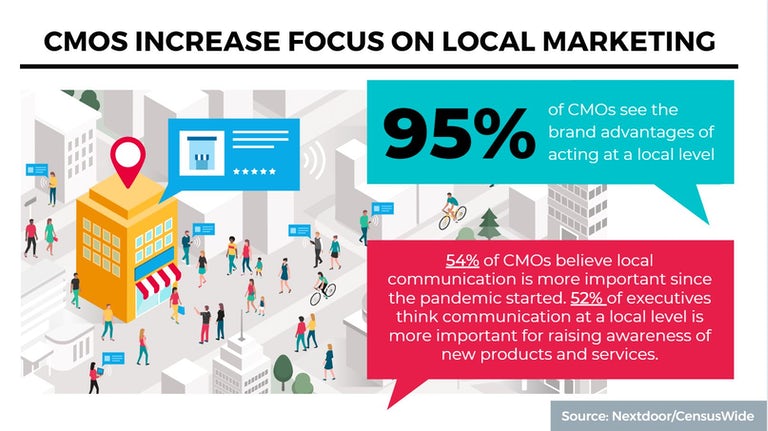 The research from Nextdoor – the neighbourhood hub – in conjunction with CensusWide, found more than half of UK CMOs (54%) believe local communications has become more important in their communications strategy since the pandemic.

The findings also suggest CMOs are putting greater emphasis on supporting local communities, as 52% stated this was very important to their business.

When asked how local advertising will be used to meet their marketing objectives for 2021, 50% of respondents said it will be important as they expand into new markets.

A further 47% stated it will be important to help them raise awareness of new products and services. Additionally, 55% will believe it will be key for increasing sales, and 40% for rebuilding following the pandemic. 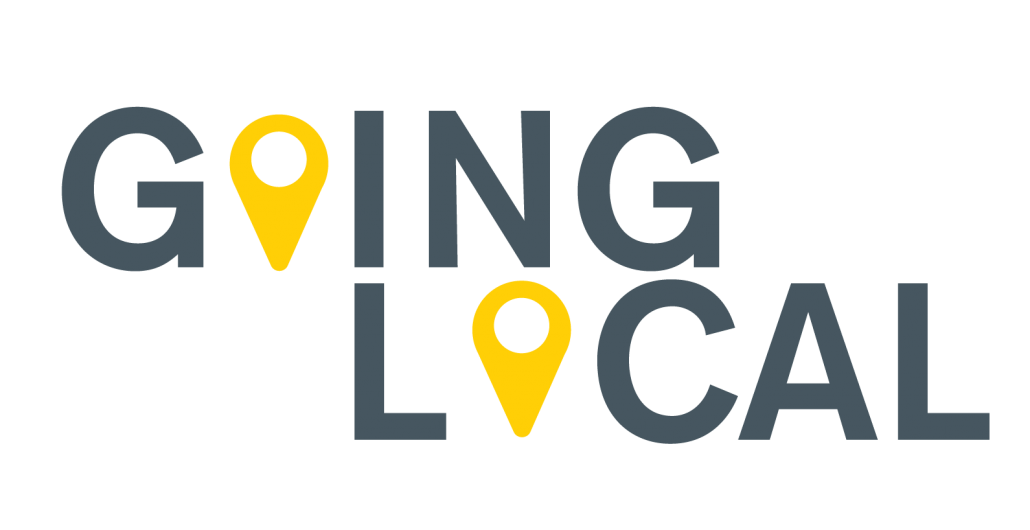 All of this reflects our own Going Local research study from late last year which found that 65% of all adults were more likely to notice OOH ads as they go about their local areas now and that 64% feel OOH ads are part of the everyday fabric of their local communities.

New figures published by Kantar this week reveal that grocery sales in Ireland grew by 16.8% in January.

With kids and parents returning to home-schooling, the effects were felt at the tills. Households with children spent €172 more on groceries last month. The Kantar report showed child-friendly breakfast and lunch options were popular with an additional €4.5m being spent on cereals, €3.9 million extra on yogurt and €7.8 million more on cheese.

A month that is typically full of good intentions and resolutions, January saw sales of non-alcoholic beer grow by 84% year on year. However, spending on treats was up and sales of chocolate and crisps grew by 26% and 40% respectively. 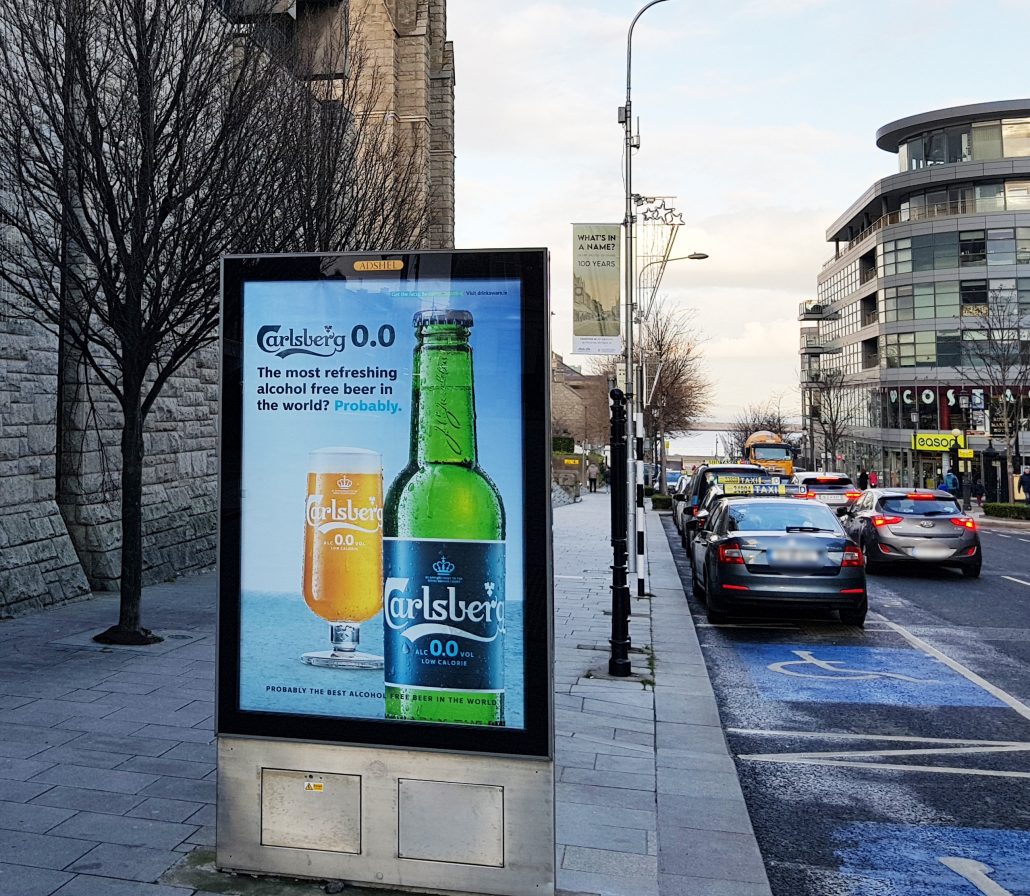 The Brexit fallout was felt on supermarket shelves in January with imported produce such as strawberries and soft fruit sales falling. However, the demand for homegrown stables increased and Irish vegetables sales were up 18.5%.

Looking at retailers’ performance over the past 12 weeks, Dunnes Stores remains top of the leader board with a market share of 22.6%, Kantar attributed this to shoppers spending more in Dunnes than at any other retailer.

SuperValu achieved a 22.1% share of the market with sales rising by 18.5%, Tesco saw sales increase by 16.5% to capture 21.9% of the market.  Larger shops contributed to much of the sales growth for both. However, Tesco saw the biggest increase in trip size as shoppers added on average 3.5 more items to their trolleys.

Lidl achieved the strongest growth of all the retailers as shoppers spent an additional €77.9m in store, growing sales by 25.6%. Aldi held a 11% market share driven by shoppers adding more items to their baskets.

In the latest Deloitte State of the Consumer Tracker update, in-store is still the most preferred shopping channel for Irish consumers. Across the range of items measured, Medicines (86%), Groceries (85%) and Household goods (85%) have the highest consumer intention to purchase in-store. 19% of Irish consumers intend to spend more on groceries in the next four weeks. 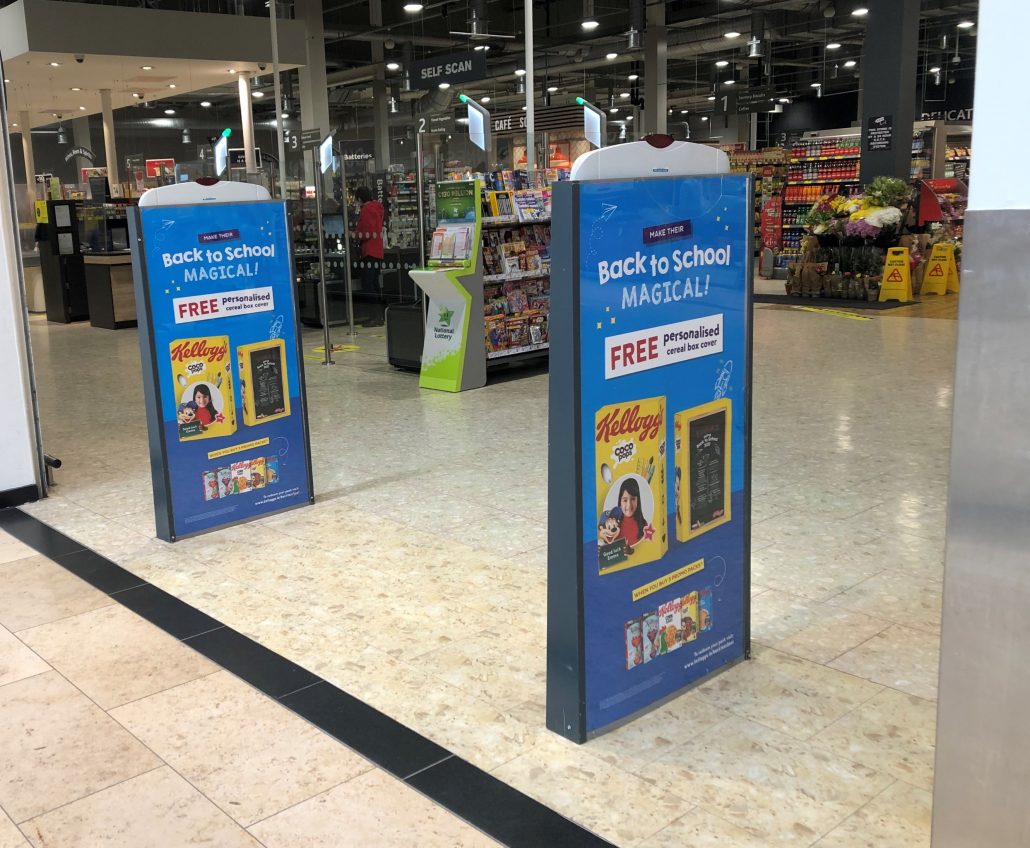 People’s preference for name brand items was evident in the tracker with personal care and beverages the most preferred. Over a quarter (29%) stated they choose name brand products because they trust them while 32% choose name brands as they believe they are of higher quality.

This week, the IPA published its latest Touchpoints study, “Making Sense, The Commercial Media Landscape.” Although the report is based on GB audiences, many of the behaviours and learnings from the report are transferrable to audiences here.

Of major interest to us of course is the assessment of OOH’s reach. Prior to lockdown, Outdoor delivered the highest reach of any commercial media for All Adults. As our time spent in OOH environments fell in line with lockdown restrictions, the reach of Outdoor didn’t see a corresponding drop, only shifting to second place, behind Commercial Live/Recorded TV. 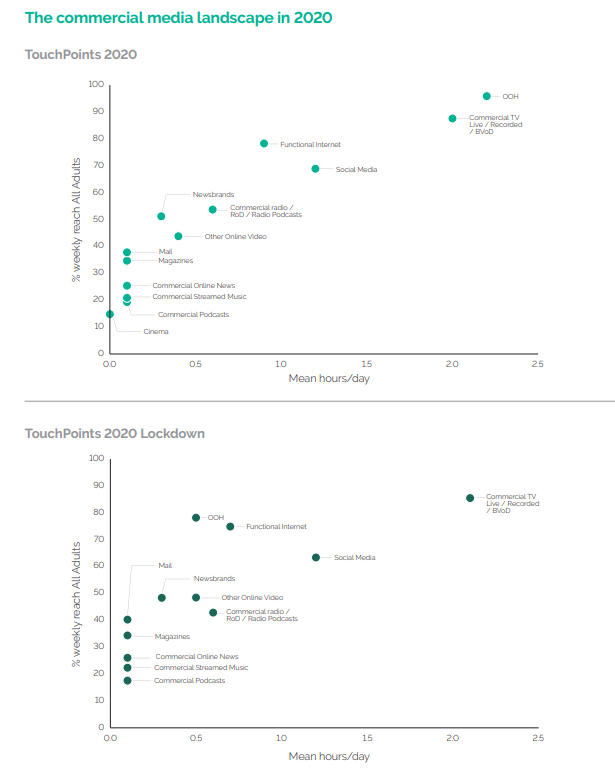 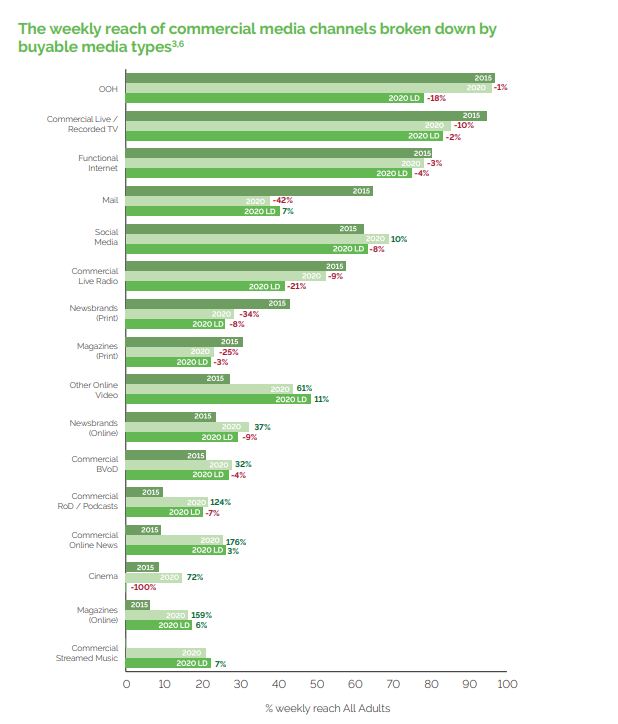 Notably, the report divides the audiences by age range (16-34, 35-54, 55+) giving an in-depth assessment of the variances in media consumption by these groups. A key result of the report shows the widening gap in how the youngest and oldest audiences consume commercial media, differences which have been accelerated by lockdowns.

For commercial media in 2020, more time is now being spent with digital rather than non-digital channels. For All Adults the split has grown from 58:42 towards non-digital in 2015 to 49:51 in 2020. However, in lockdown the pendulum swung back slightly in favour of non-digital taking 52:48. The opposite was seen for 16-34s in 2020, where already 73% of all commercial time was spent with digital, this accelerated to 79% during lockdown. 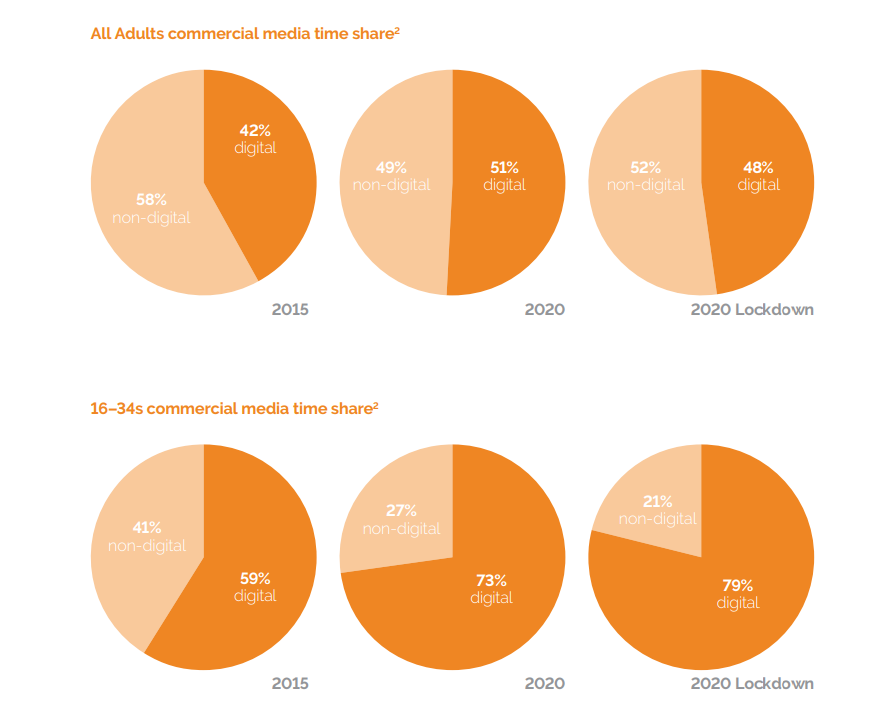 Consumer behaviours are changing rapidly, and faster than we could have imagined. The report demonstrates that the younger 16-34 audience still want news content as much as 55+, but they want it in a way that suits them – often digitally and on mobile. For the 55+ age range, physical newspapers and TV news broadcasts suit their lifestyle.

Guinness Brings it (Out of) Home for Six Nations Campaign