Colum Harmon, marketing director, kicks off Now Near Next for 2021, the series that focuses on relevant Out of Home thought leadership pieces to aid brands and agencies.

The new year has certainly begun with a familiar set of challenges for the OOH sector as full level 5 restrictions are implemented across the country. Although we find ourselves under similar limitations as March/April 2020, our understanding of audience behaviour in these circumstances its utterly different now and we will continue to provide relevant data and insights for OOH advertisers and planners on these pages in the months ahead.

This is a pivotal moment for brands.  The reality of a vaccine roll-out means the light at the end of the tunnel is now visible, there are significant opportunities to grow share of voice, project stability and re-position for success in the coming year.

The ‘Staying On’ research conducted between seven industry contributors including Posterscope in the UK illustrates that advertisers continuing to invest in OOH in times of uncertainty benefitted from an average +51% shift in ad recall and +16% purchase intent – driving the needle on both long-term and short-term business effects.

In this first week of the new year we are also publishing brand new local research, on media effectiveness, which we carried out in December in partnership with Ipsos MRBI. More on The Media Impact Study below.

On the campaign front, the raft of Christmas themed advertising in December has given way to more typical January/new year focused campaigns on the medium and some of these are highlighted in this issue also. 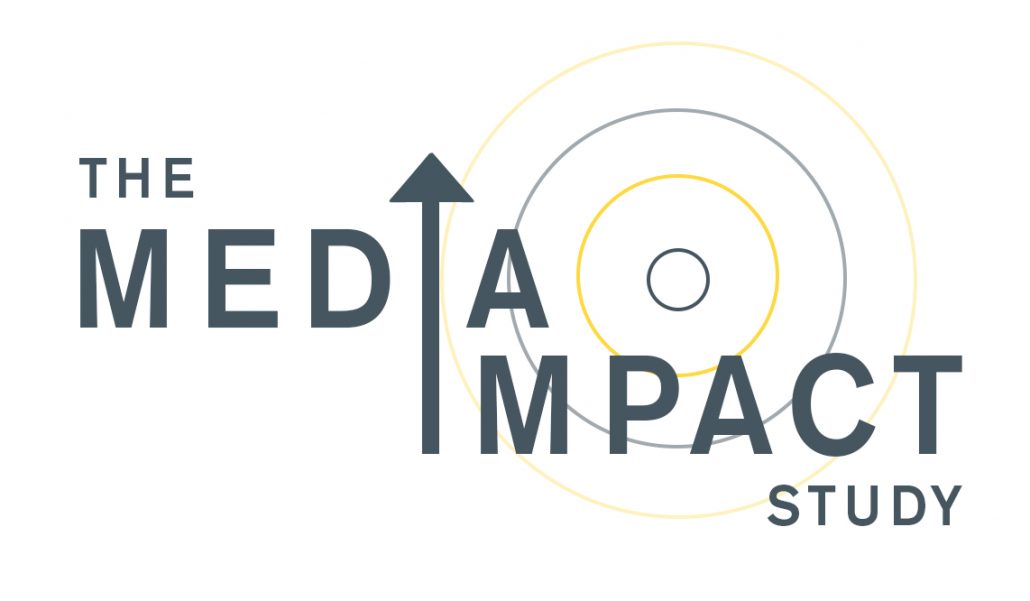 Throughout the pandemic, PML Group has partnered with Ipsos MRBI to provide timely and pertinent research on consumer behaviour. Our ‘Going Local’ study, published on these pages in December is perhaps even more relevant now given the latest government measures to supress the virus. More on that can be found here. This week, however, we can share brand new research, investigating the potential future effectiveness for media in reaching and influencing audiences in the coming months. ‘The Media Impact Study’ uses a 10-point scale to measure consumers own opinion as to which media channels will be most effective in communicating with them. We conducted the same piece of research in June last year and can therefore track changes between those two waves of research.

The key outcome is that OOH is the only medium where the mean score has improved, albeit very slightly. The charts below show these changes by channel and across various age groups. 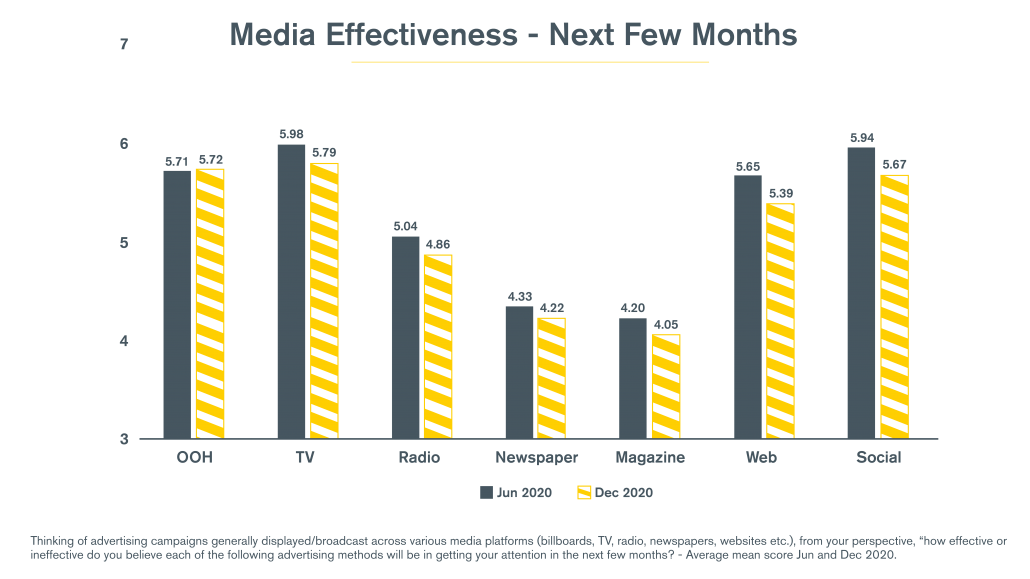 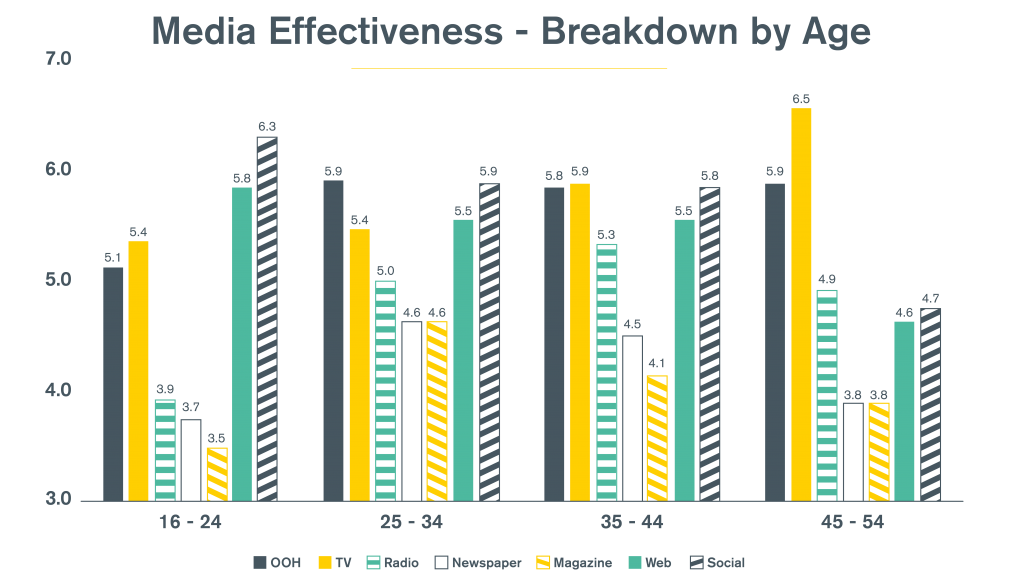 Looking at some demographics, the female score of 6.2 for OOH, compares to an average of 5.5 across all media, making it one of the top performing media for females, according to the sample.

OOH ranks among the top 3 media for all age groups and is number one among 25-34s and the second most effective for ages 35+.

Overall, 43% of all respondents gave OOH a rating of 7 or more. 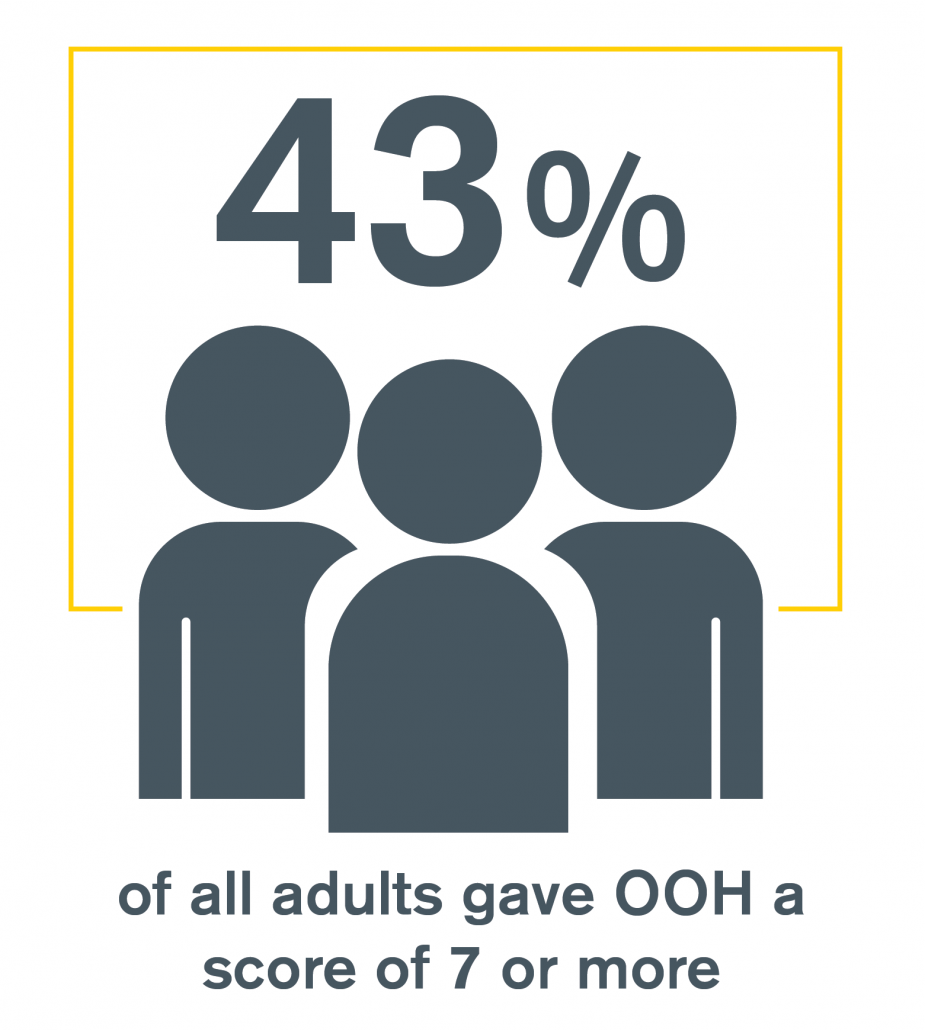 A Healthy Dose of OOH

Following a glut of festive campaigns (many involving food and drink!) the OOH year has begun with a selection of campaigns more focused on health and well-being. Carlsberg 0.0 is tapping into Dry January via 48 Sheets and 6 Sheets while Denny Meat Free is a timely reminder for those inclined to partake in Veganuary, with a campaign focused on point of sale formats including Store Points, Adbox and Retail Digital. Irish Life Health is running one of the larger cycle 1 campaigns, featuring on 48 Sheets, Metropoles and 6 Sheets at a time when many are renewing plans or considering alternatives for the year ahead. Also, an IKEA campaign based around the sustainability of their products features on large formats roadside and 6 Sheets. 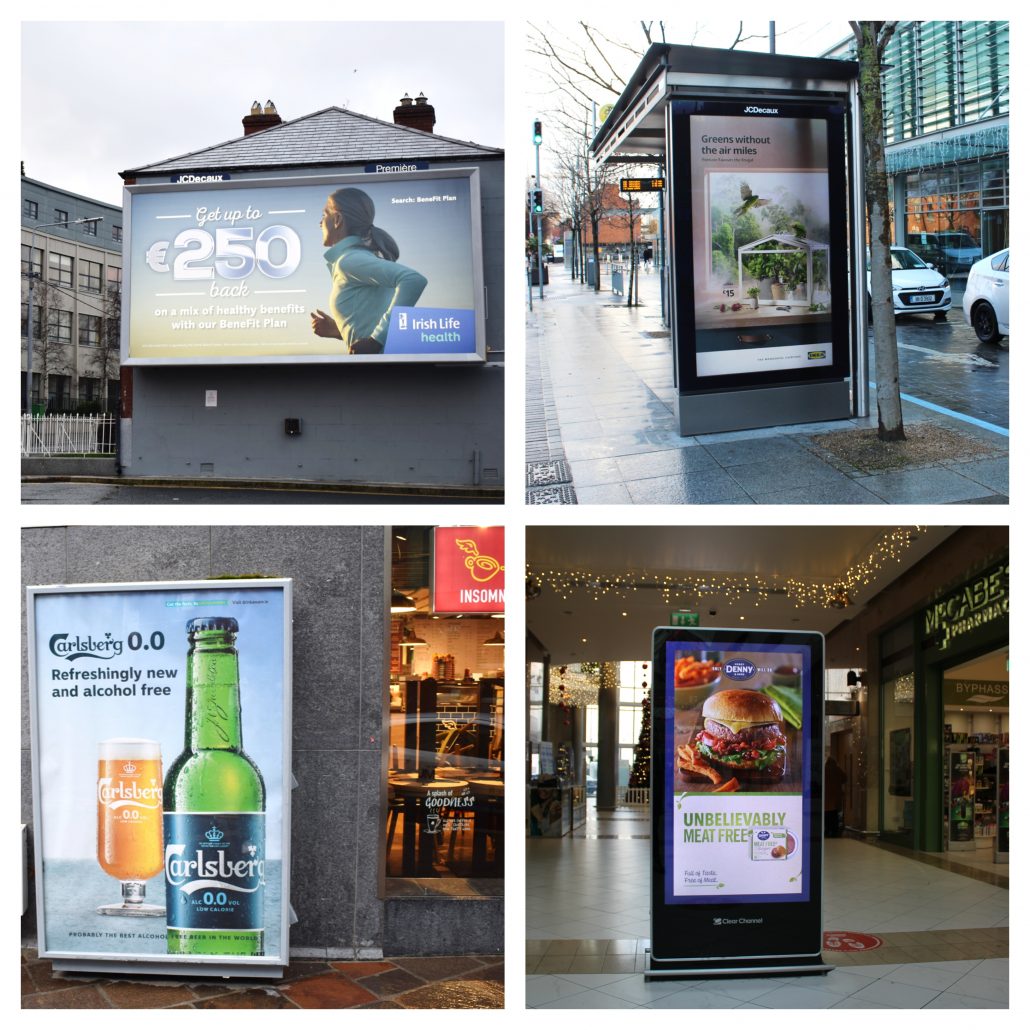 A new survey shows that 53% of respondents plan to make living more sustainably a part of their New Year’s resolutions.

The AIB Sustainability Index, based on research conducted in December by Amárach Research, focuses on Irish attitudes, behaviours and intentions regarding climate and environmental sustainability.

Over the next year, 67% of respondents said they plan to reduce the amount of packaging and single use plastics they use. 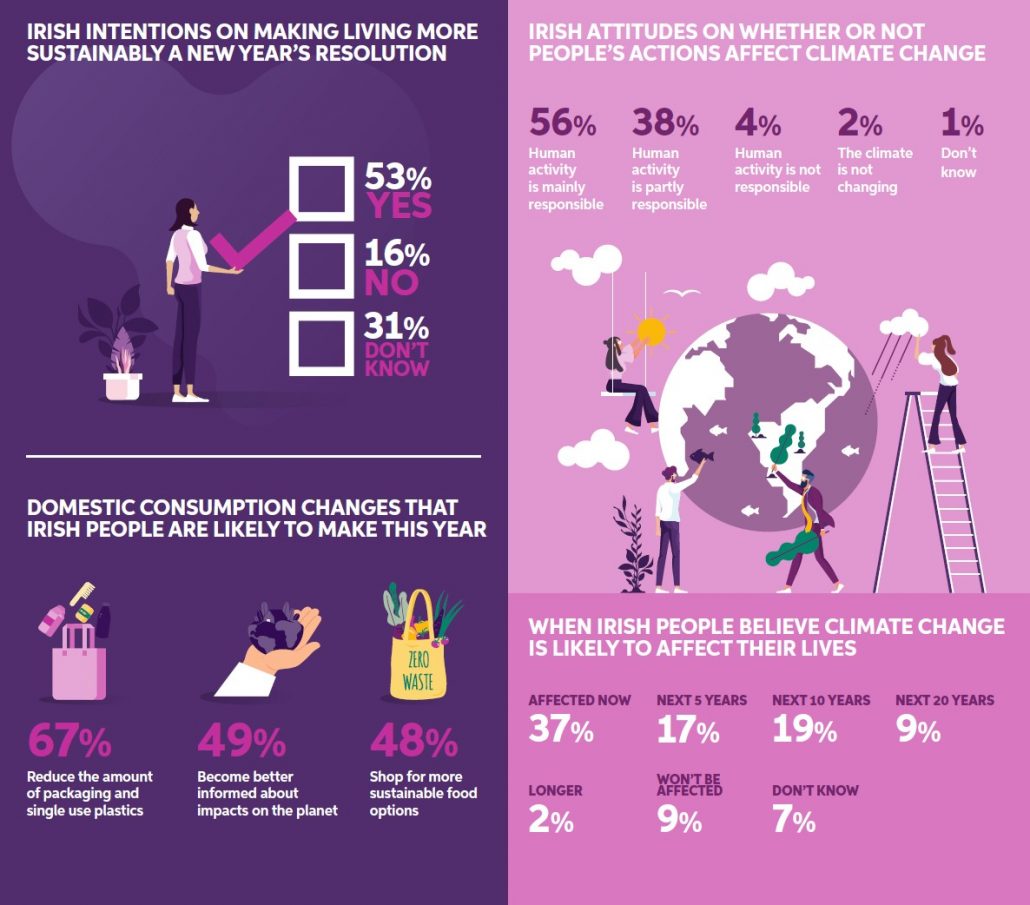 49% also said they intend to become better informed about the impacts of what they buy on the planet.

37 per cent of people state they are already being personally affected by climate change, while another 36 per cent say they expect to be impacted in the next 10 years.

81 per cent of people think that collective effort is more important than individual behaviour when it comes to tackling climate change. 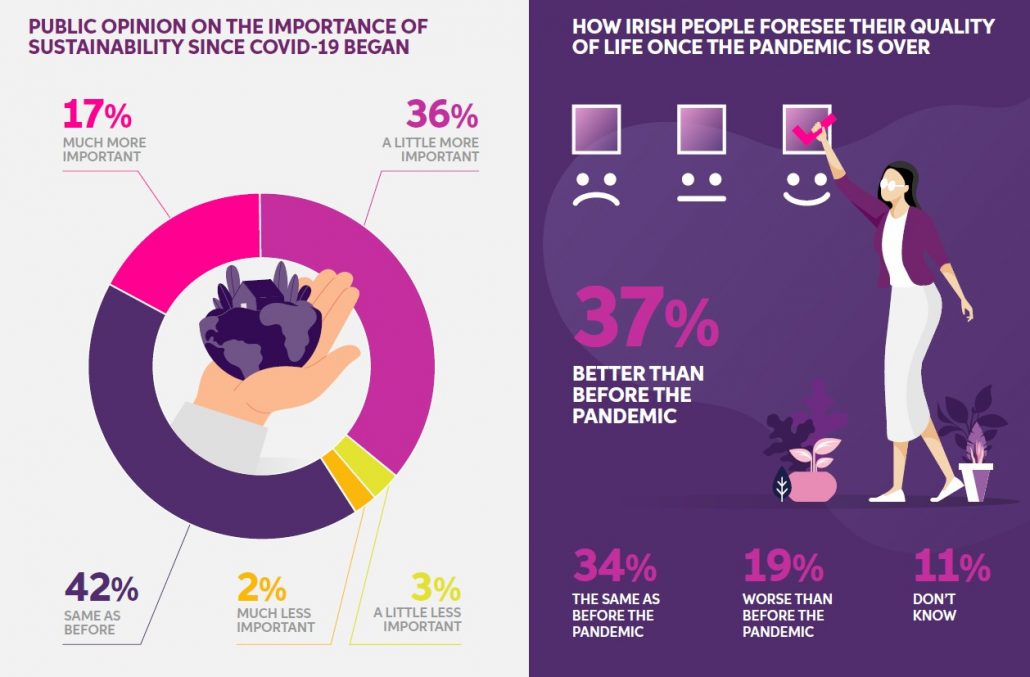 With more people working from home and the other changes that have come about due to the pandemic, 37 per cent expect that the quality of their life after the pandemic will be better than it was before its onset, 19 per cent expect it will be worse, with the remaining third expecting no major change compared to pre-Covid-19.

On the Go Consumers

In 2020 research published by GPS navigation software, Waze, revealed that the average length of car journeys has grown exponentially since the outbreak of COVID-19.

With public transport limits capped, the daily commute disrupted and consumers shopping closer to home, the report outlines how these on the go consumers who are travelling by car present a window (or windscreen) of opportunity for advertisers.

Waze found that retailers now more than ever are seeking to reach these on the go consumers, with over 80% of retail marketers stating that increasing store visits was of high priority.

As advertisers compete for audiences’ attention, Waze concludes brands would ideally share their messages at key moments when consumers are primed to act or make a purchase. However, the results reported that three in four marketers (78%) struggle to identify and intercept customers at critical moments in the consumer journey.

As brands look to influence buyer behaviour, leveraging OOH and DOOH sites can allow advertisers to reach and target consumers at critical points in these ‘on the go’ journeys. The Waze research found that brands who use DOOH during the final mile of a shopper’s journey benefit from, on average, a 9.1% increase in sales volume and an increase of 8.3% in the size of sales.

With marketers struggling to connect with consumer at the right moment, the research points to how contextual advertising can be a key differentiator that can deliver creative brand messaging, promote the latest offers or provide useful information such as the nearest store location or opening hours. 83% of the respondents said they are focusing on the context of their advertisement.

Among marketers who use DOOH as a form of advertising, the top reasons they use the medium was to reach consumers during a critical moment of influence, to complement other omnichannel advertising efforts and to support offline sales.

Not only does DOOH fulfil the need to reach consumer at critical moments but it also delivers results and positive outcomes for advertisers. Respondents that have invested in DOOH advertising have seen or expect to see increases in the volume of sales, size of sales and increase in traffic to stores.

And this investment is likely to increase, 30% of marketers reported they use DOOH as an advertising channel. The research outlines how brands are planning to increase their investment in DOOH advertising by 4.1% in the next year. Firms that already use DOOH are also increasing their investment in more traditional OOH formats at a rate of 1.9x greater than others, demonstrating the medium’s ability to reach on the go consumers at the most opportune moment to influence purchasing behaviour.

Walking was the most popular form of exercise and saw the biggest increase in participation with 62% of adults walking for exercise compared to 44% in 2019.

As detailed in previous Now Near Next editions, cycling’s popularity surged in 2020 with bike sales booming. The Teneo research found that cycling was the second most preferred choice of exercise for Irish adults at 21%, with a whopping 75% increase in the number of people cycling compared to 2019. Men are twice as likely as women to use cycling as form of exercise and highest participation was seen among 18 to 24 year olds (46%). 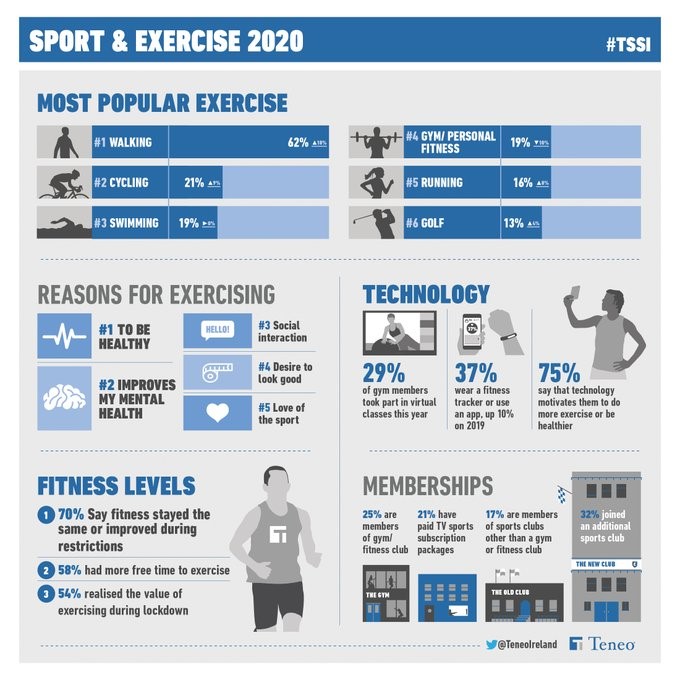 Running’s popularity also skyrocketed and is now the fourth most popular form of exercise at 16%, behind swimming and gym/personal fitness which are tied in third at 19%.  The research found that twice as many people are running than the year before, with the highest participation found among 25-34 years olds.

Gym and personal fitness participation slowed to 19% compared to 29% in 2019 as gyms/fitness clubs were closed for a large proportion of the year and a preference for outdoor activities took prominence. However, gym membership held firm with the research finding a quarter of Irish adults are a member of a gym/fitness club.

Improving physical and mental health were the main reason given for the increase in exercising.  One in four said their fitness improved in 2020. Factors which contributed to the overall improvement in fitness were more time to exercise (58%) and over half (54%) stated that lockdown made them realise the value of exercise.  With this increase in physical activity, the use of fitness trackers has also increased with 37% of Irish adults now using a fitness wearable to track their fitness.

As more people engage in physical activity, and exercise that takes place in outdoor settings proving popular, exposure to OOH intensifies in local areas as travel limits are in place.

All of us at PML group were thrilled to end a tumultuous year in 2020 by picking up an award at the Irish Content Marketing Awards in the FMCG category. This was for our work with Mondeléz and Carat on the Cadbury Premier League dynamic campaign, delivered via our Liveposter platform. Proof that content marketing can be highly effective in the OOH space and particularly managed through dynamic content management systems, such as Liveposter, and delivered via premium digital inventory. 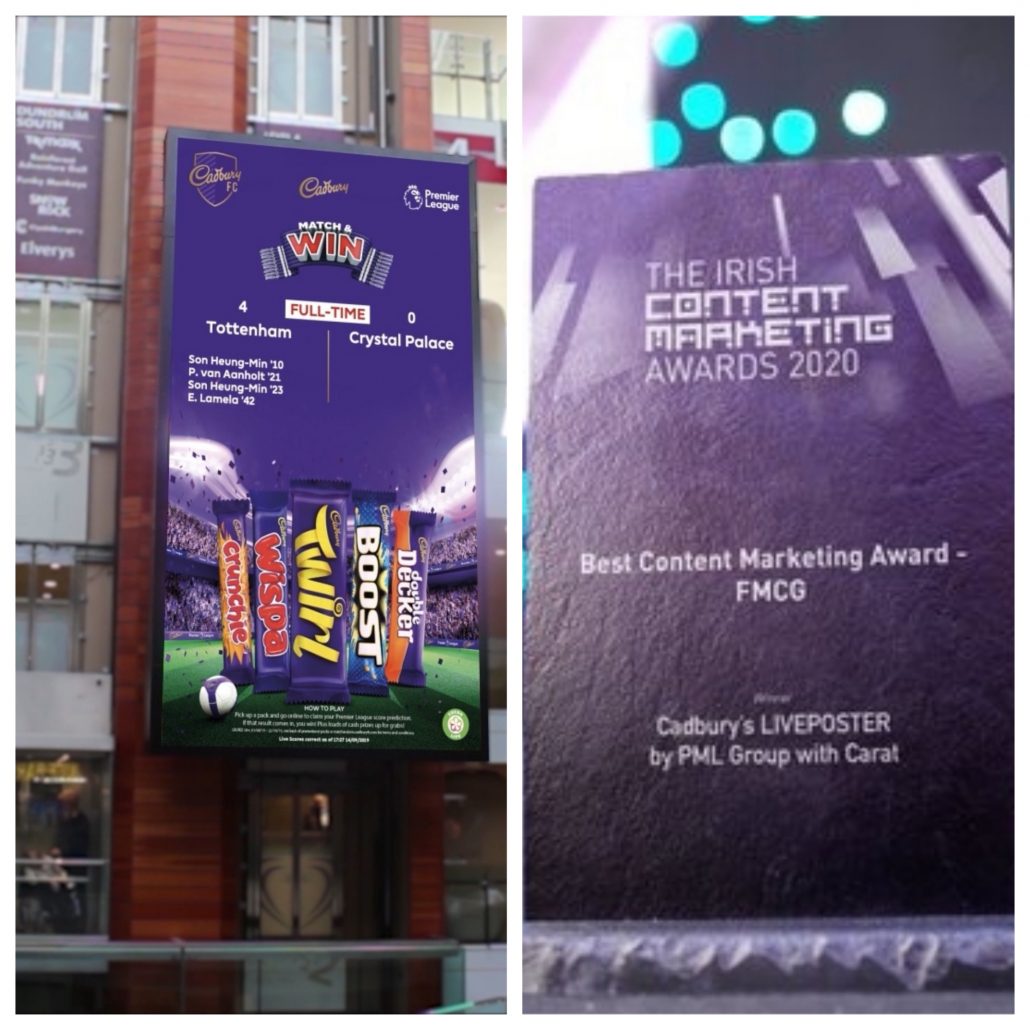 FREE NOW Wraps up the Year on OOH