Accelerated change is undoubtedly one of the major fallouts from COVID-19. Fundamental changes in how we work, how we use technology in our daily lives and how we interact with people and the physical world around us. It remains to be seen whether these changes are a temporary response to a crisis or whether they are truly long term. Globally, a change we all have a stake in is whether the pandemic will alter our collective behaviours with regard to the long-term sustainability and health of the environment. In our latest wave of iQ research, we partnered with Ipsos MRBI to study attitudes to the environment in light of COVID-19 and consumers expectations of brands in their marketing and advertising in this context.

What we can say for sure is that our representative Dublin sample of 300 16-54 year olds have had their mind focused with regard to the environment as a result of the experiences of 2020 and the pandemic. Exactly two thirds of the respondents (67%), say that COVID-19 has made them more concerned about the environment. This rises to 72% among females and rises even further to 87% among females in the 16-24 age bracket. 81% of 25-34s say that, as a direct result of COVID-19, they are more likely to purchase environmentally friendly products and services. And this is where marketing and advertising has such an important role to play. A whopping 84% of respondents expect companies to clearly explain the environmental benefits of their products in their advertising. There is little or no difference across age groups in that regard. Half of respondents consider the environmental benefits of a product when making a purchase decision. So, the message, and how it’s delivered is becoming more and more important to consumers.

Of course, OOH is the perfect platform for this message. Uniquely, it inhabits the great outdoors. It is intrinsic to the environment we all inhabit on a daily basis. New research from Posterscope in the UK (The Mobility Mindset) shows that almost half of respondents agree that Outdoor advertising is part of the everyday fabric of their town / city which makes brands using them feel more familiar. Modern and increasingly eco-friendly classic and digital formats are a logical canvas for brands. The last few cycles alone have seen examples such as An Post Green Hub, Repak, L’Oréal, Persil and Audi communicate green messages. 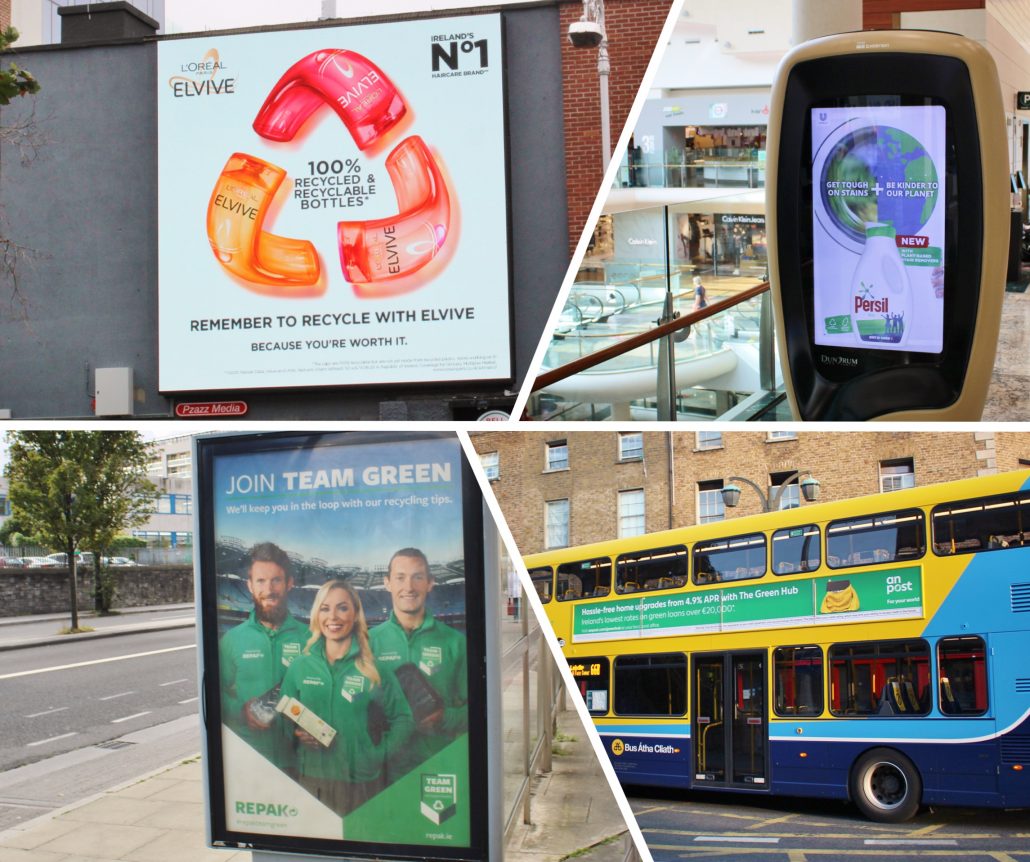 OOH also affords brands the opportunity to make the medium the message, so brilliantly done by Carlsberg with its eco-wall which resulted in more than 1,000 plants being donated back to the local areas post-campaign. 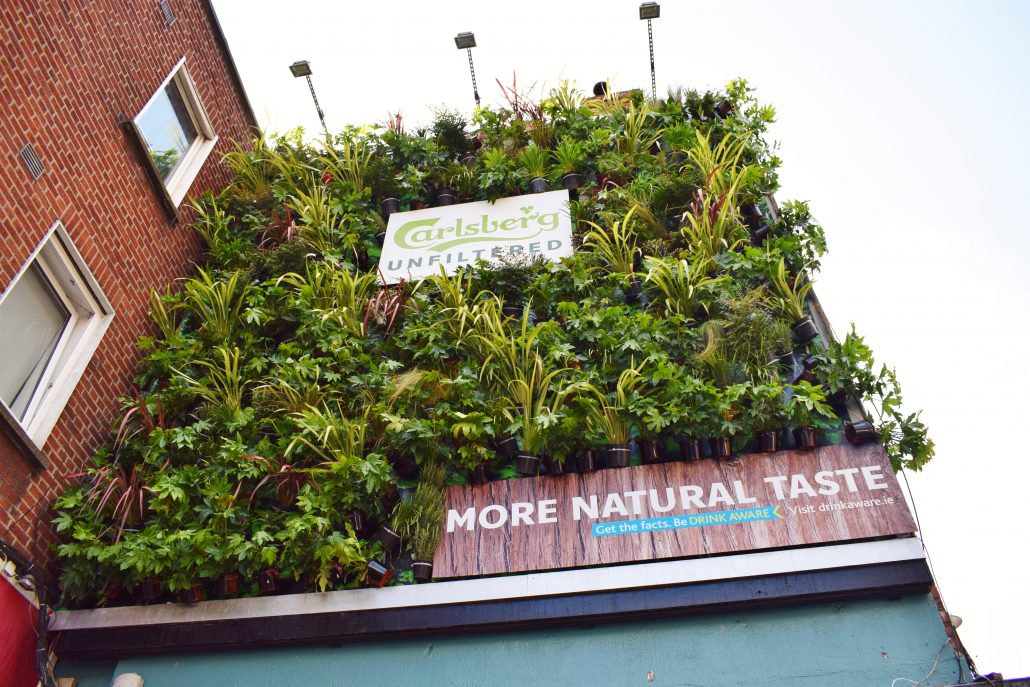 Media owners are constantly looking to implement energy saving measures to power new and existing formats. In 2018, JCDecaux, ESB and NTA joined forces to reduce the carbon footprint of Ireland’s bus shelters by 88%. The work has greatly improved the quality of the illuminated shelters with the removal of all fluorescent light bulbs and the introduction of more environmentally friendly and better-quality roof lighting and ad panel LED systems. Clear Channel has successfully tested a solar bus shelter lighting solution for its shelters.  Batteries stored in a well adjacent to the shelter are governed by software to monitor power capacity and regulate lighting output as required. From an environmental viewpoint, the benefits include use of a renewable energy source with zero carbon emissions, more than 1,000 kgs of carbon saved annually compared to grid connected shelters and safe low voltage, non-fragile LED lighting with no hazardous mercury. The company’s plans for Leicester in the UK point to the possibilities closer to home with every shelter included in the Leicester City Council contract will be replaced with a new structure that is 100% recyclable and features seats made from recycled plastic. Thirty key city centre shelters will be installed with Living Roofs – constructed from sustainable materials and featuring a mix of wildflower and Sedum plants, to help improve local biodiversity, supporting dwindling bee and insect populations, while helping to increase climate change resilience and add further greenery to the city.

While new initiatives such as these are very welcome, the commercial model for OOH advertising has contributed to the green agenda for many years in Ireland. OOH advertising of course contributes to the provision of public transport services while the JUST EAT dublinbikes scheme is a partnership involving OOH media owner JCDecaux and provides 1,600+ bikes to the city.

COVID-19 has thrown up some extraordinary challenges for brands in 2020 and the knock-on effect will be seismic. Consumer mindsets have changed also. Not least in relation to the future of our planet. Marketing and advertising must and will react. Out of Home is well placed to play its part.

TII’s latest traffic trend information, generated from a sample of ten traffic counters located on the national road network, reports a +22% weekly increase overall in volumes on this Wednesday 4th.  You can see the regional breakout in the map below. November previous week. Figures are down 31% on same day last year but 187% higher than those recorded on 22nd April in the first period of lockdown. 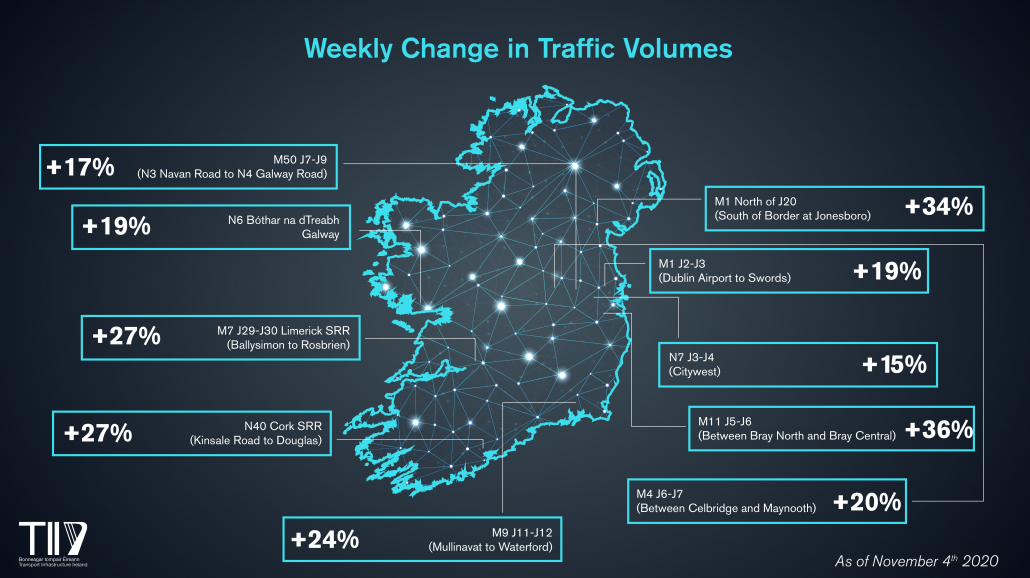 Following the end of the mid-term school break and the return to classes on Monday, car traffic figures show a significant increase in volumes as compared with Wednesday of last week illustrating the prominence of the school run in mobility motives. Car traffic is up 36% on the M11 at Bray, 20% on the M4 at Celbridge-Maynooth, 19% on the M1 at Swords to Airport and 15% on the N7 at Citywest. The M50 (N3 Navan Road to N4 Galway Road) shows a 17% increase as compared with Wednesday 28th October. This reflects the general increase in peak time car traffic volumes on the radial approaches to the city this week. In the case of the regional cities there is a significant increase in car traffic volumes this morning as compared with Wednesday 28th October, in response of the return of schools. The traffic volume changes are as follows: N40 Cork +27%, M7 Limerick +27%, M9 Waterford +24% and N6 Bóthar na dTreabh Galway +19%.

The TomTom Traffic Index provides detailed insights on live and historic road congestion levels in cities around the world. 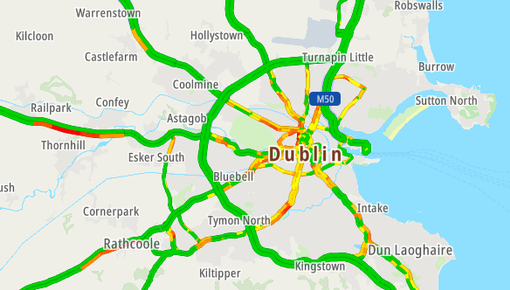 Congestion levels in Dublin average at 34% for Mon-Wed this week up from 22% the previous week during the Halloween school holidays. It is down just 4% from the pre-level 5 figure recorded week commencing Oct 12th and double that experienced in the same days across April during the first lockdown. It is 68% of the standard daily congestion level in 2019.