James Byrne, marketing manager, PML Group with this week’s Out \ Look on Out of Home.

On the Move – Update on Mobility Trends

Transport Infrastructure Ireland is reporting that traffic volumes have increased on average +9% in the past month and are now +17% those recorded for the same day last year. 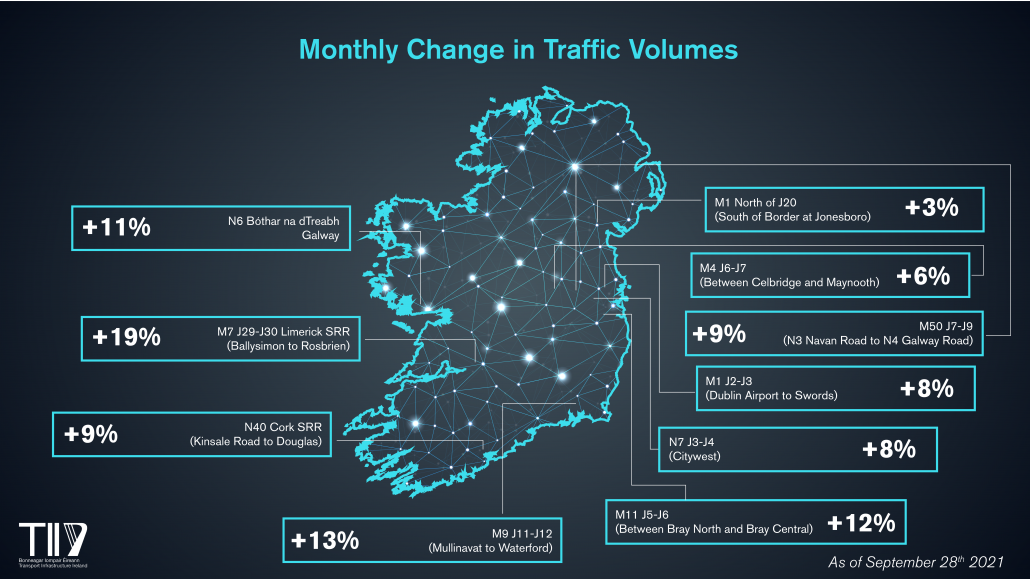 Tuesday’s totals from the sample of ten traffic counters located on the national road network for the morning period from 7am until 10am give the following comparisons with four weeks earlier.

TomTom’s Traffic Index is reporting yearly highs for congestion levels in the three main cities with rush hour delays approaching or surpassing those witnessed in 2019.

Wednesday’s congestion in Dublin averaged a recent high of 55%, +2% on the same day in 2019 and up from 41% on the same day last year. The severest rush hour congestion was at 9am at 100%, more than double that recorded last year. A 100% congestion level means that a 30-minute trip in the capital took double the time than it would during baseline uncongested conditions.

We are most definitely on the move in Ireland and we expect this upward trend to continue as the reopening of offices gathers pace in the coming weeks.

This week, we continue to highlight the findings from our latest wave of consumer research, The Big Switch, conducted among a representative sample of 300 16–54-year-olds in the capital. As we emerge from the pandemic, consumers are adopting changes to their lifestyle and leisure activities as we see a return to a sense of normality. The appetite among consumers to spend money on leisure and enjoyment has returned, according to the research. 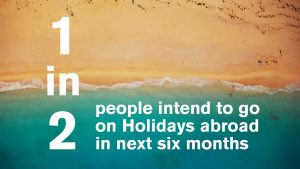 According to the study, one in two people intend to take a holiday abroad in the next six months. 72% among males aged 35-44. Despite an increase in tourism abroad, 52% of respondents intend to take a holiday in Ireland over the next six months which suggests people are on the move again across the country. This could be an opportunity for brands to engage with their audience as we continue to see consumers opting for staycations across Ireland. 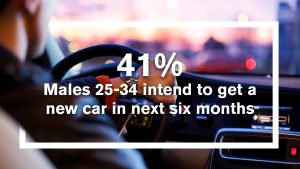 Staying on the topic of movement, the study found that 41% of males aged 25-34 intend to change their car in the next six months, versus 20% of females in this age category. We are also seeing a big switch from individuals working from home and returning to office, which indicates consumers could be looking to invest in a car upgrade for their commute. This data is highly relevant for brands in this category, including cars themselves and insurance companies advertising on OOH is the next few months.

Since the start of the pandemic, many individuals have adopted behavioural changes to improve their overall health and lifestyle choices. The study found that 25% of 16-24s intend to quit smoking over the next six months compared to 14% of 45-54s.  In recent cycles, we have seen the HSE Quit Smoking campaign use OOH advertising to encourage individuals to quit smoking and seek support. Using OOH advertising is essential for brands to incorporate when communicating important health and lifestyle messages to its audience. 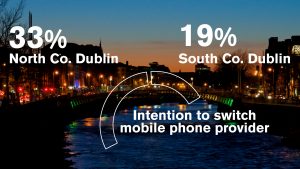 Those living in North Co. Dublin are most likely to be changing mobile phone provider, at 33%. In contrast, those living in south Co. Dublin appear more content, with 19% looking to make that switch. However, 26% of all respondents said they would have intentions to change their mobile phone which highlights further how consumers have a desire to shop around and find the best value, changing their buying behaviours. This is where OOH advertising can play an important role for brands to communicate to their audience and influence the consumer’s decision making at key times.

Mood of the Nation

As we continue our path out of the pandemic, The Department of Health’s latest Public Opinion Tracker, conducted by Amárach Research shows the mood of the nation has become increasingly optimistic. 53% of individuals believe Ireland is trying to return to normal at the right pace. More than two thirds of respondents (68%) feel the worst of the Coronavirus crisis is behind us, reaching its highest level since July which peaked at 68%. 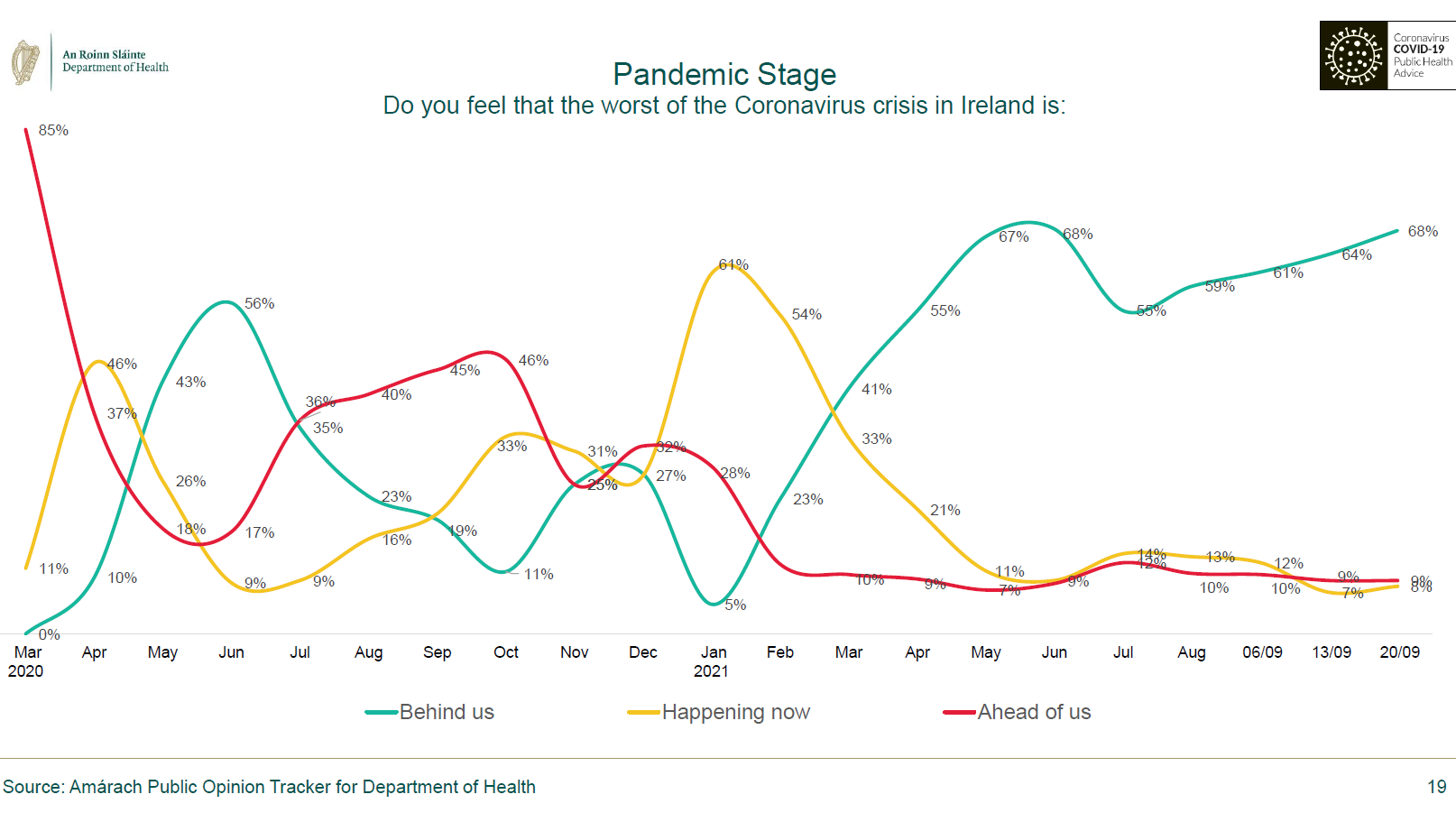 In terms of emotional Wellbeing, there has been a steady increase in overall mood of the nation since the beginning of the year. 58% felt enjoyment yesterday – at a new high, up almost double from a low of 30% in January 2021.  Boredom was at lower levels too with just 15% experiencing the feeling yesterday. This is the lowest level recorded since the start of the pandemic. As a nation, we are on the road to normality and is an exciting time for the OOH industry to bring creative campaigns to our busy streets. 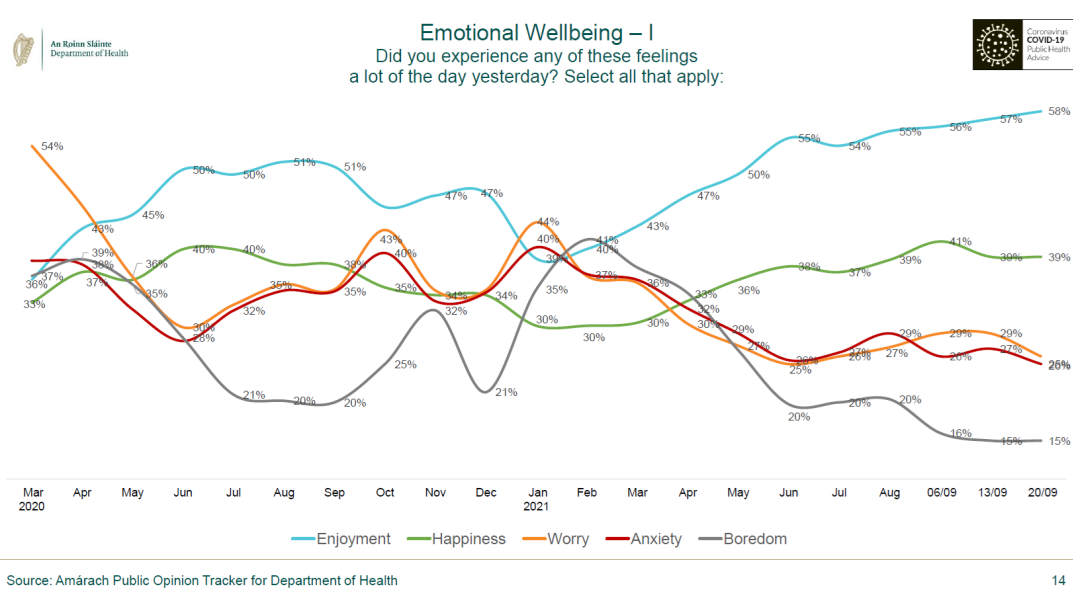 Results from Wave 17 of the ESRI’s Social Activity Measure – which is based on data collected during the week beginning 7 September, suggest that there is an increase in mobility due to the staggered return to work and education over recent weeks. The latest findings demonstrate positive opportunities for OOH as mobility continues and normality is restored.

This month, there has been further easing of restrictions on several indoor and outdoor events and activities. Sectors in which easing took place included live music/entertainment, indoor sports, cinemas/theatres and religious ceremonies. This will have meaningful impact on how we as consumer’s behave and go about our daily lives. 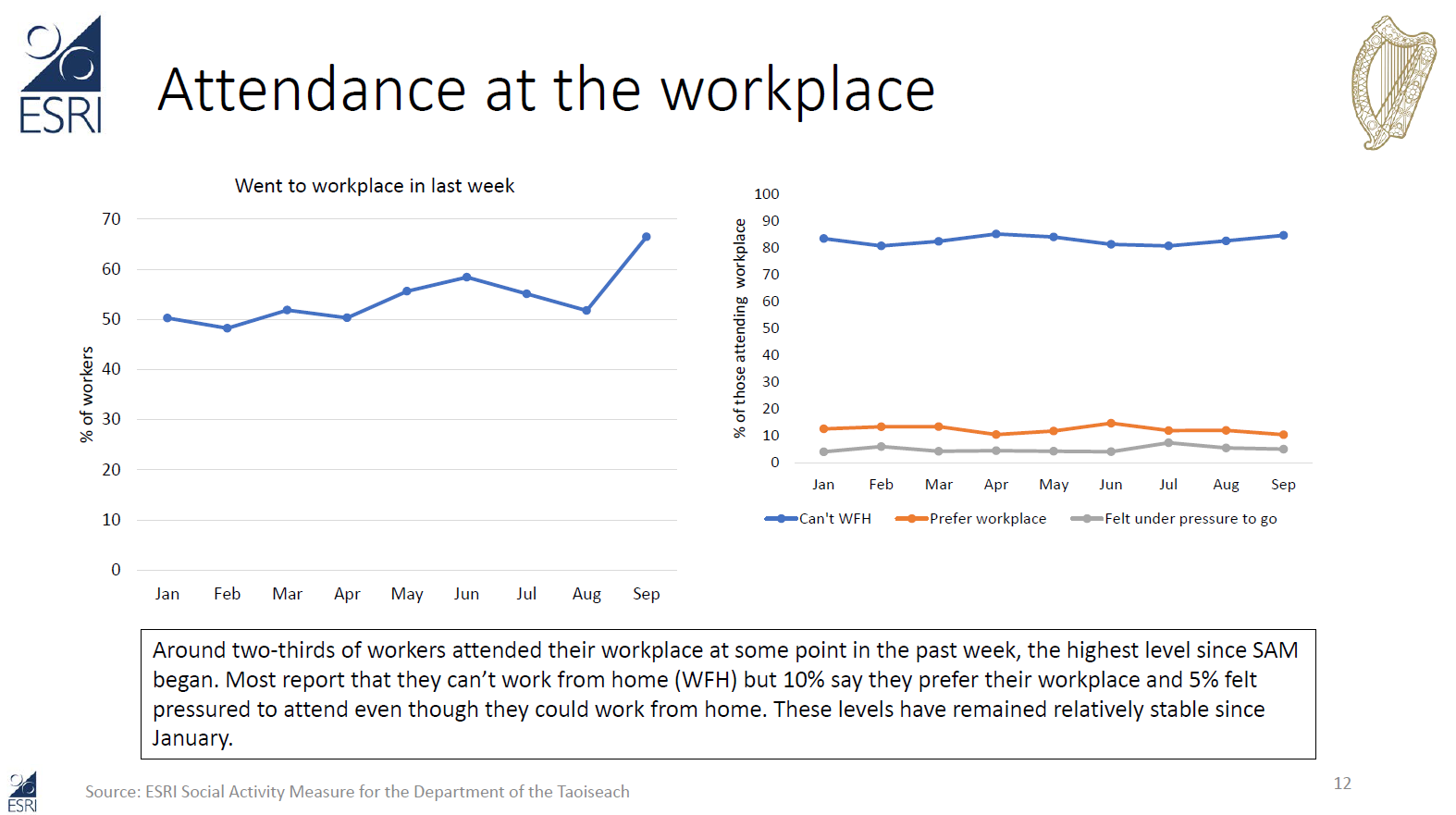 As the summer comes to an end, there has been a shift in locations visited due to an increase in people attending work and education. The SAM study reports over two-thirds of workers attended their workplace the week preceding the survey period, the highest level since SAM began. This figure is expected to increase as more people begin attending their workplace over the next coming months. 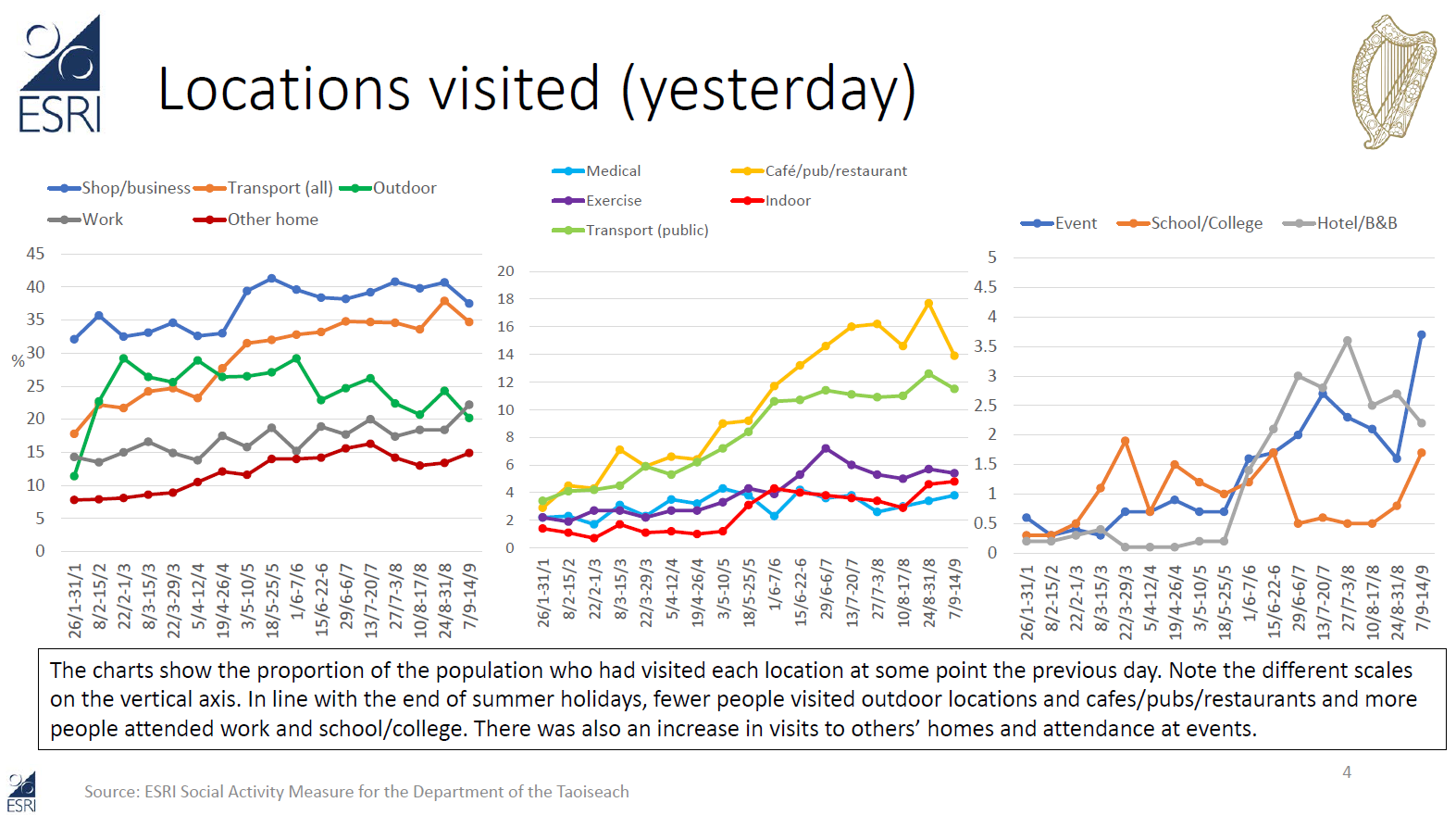 Social activities have remained stable. However, attendance at organised events has increased, driven by people attending family gatherings, the highest level recorded for events since the start of the SAM.

The Social Activity Measure (SAM), is a behavioural study that records the public response to the risk of COVID-19 infection over time and is a collaboration between the Department of the Taoiseach and the ESRI’s Behavioural Research Unit (BRU). The study collects data from 1,000 respondents every two weeks.