Lovely Day for Dynamic: Colum Harmon, marketing director PML Group with this week’s Out \ Look on Out of Home. 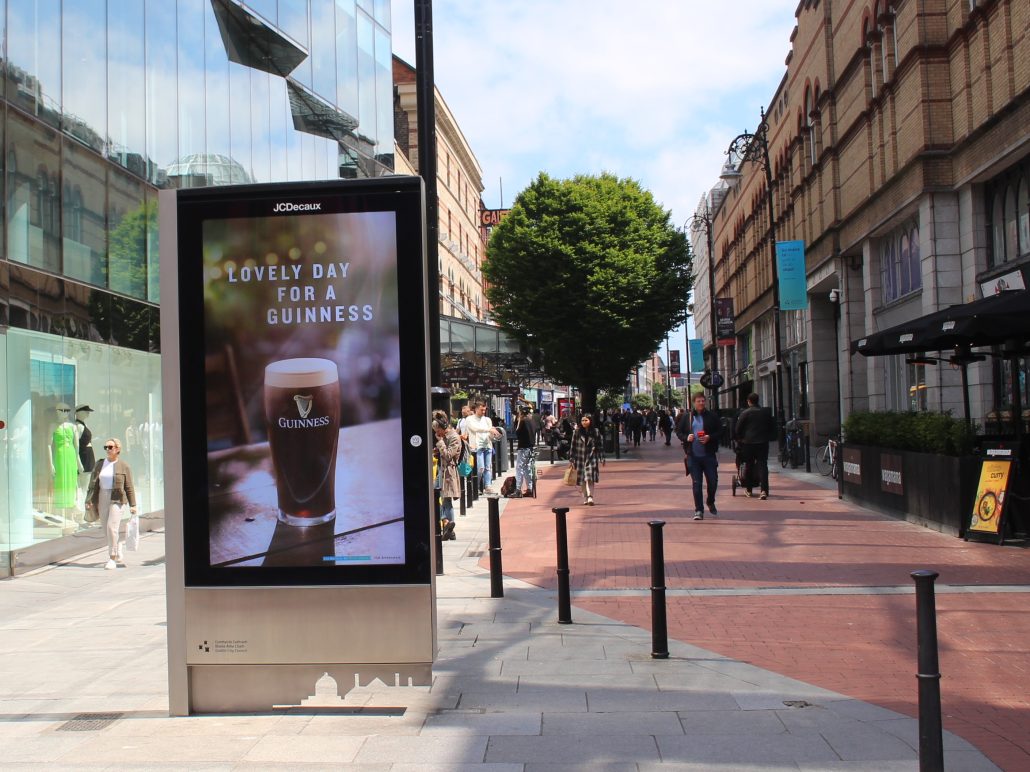 Summer is here and Guinness have hit the ground running with a dynamically enabled Digital OOH campaign. Delivered by PML Group’s Liveposter platform, the creative is based on weather conditions and displays the message ‘lovely day for a Guinness’ when its sunny or partly cloudy outside. In less benign weather conditions, the copy switches to display creative for Guinness 0.0, appealing to ‘NoLo’ alcohol consumers.

In a world of constant distraction, with information available at the touch of a button, consumers want and expect brands to connect with them in an engaging way. The Liveposter platform combines technology, data, insight and process to help create compelling DOOH campaigns that utilise the latest data to connect brands with their audience. Campaigns can be supplied to multiple media owners, globally, from this single integrated source.

The campaign was planned by Source out of home, part of PML Group, and PHD Media. The creative was produced by AMV BBDO. The nationwide campaign is running across digital formats including Orbscreens, Digipanels and Tesco Live.

Business Plus this week reported a surge in electric vehicles hitting the streets this year. The report says that the number of new battery-powered cars has more than doubled in the first five months of 2022, compared to same period 2021. The report goes on to quote Anna Cullen from AA Ireland who points to rising fuel costs as the main reason why consumers are making the switch now.

Research conducted by Ipsos on behalf of PML Group, in March this year, also looked at the growing phenomenon of EVs. At the time, Dubliners were telling us that environmental benefits were the top reason, followed by fuel costs. Since then, we have seen substantial increases in prices at the pump, so it is likely that personal financial reasons have overtaken more global environmental arguments. 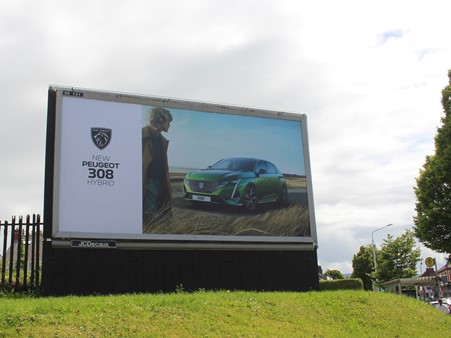 Whatever, the reason, the trend is clear and is only going one way. This is reflected in the advertising investment from car brands on OOH this year. Almost 100% of car advertising on OOH in 2022 has been for fully electric or hybrid vehicles. The display value of cars on OOH has increased by 95%, when comparing cycles 1-11 in 2002 and 2021. EV and hybrid vehicles now account for just under 3% of all OOH advertising this year. The campaign above for Peugeot is currently on display in cycle 12. 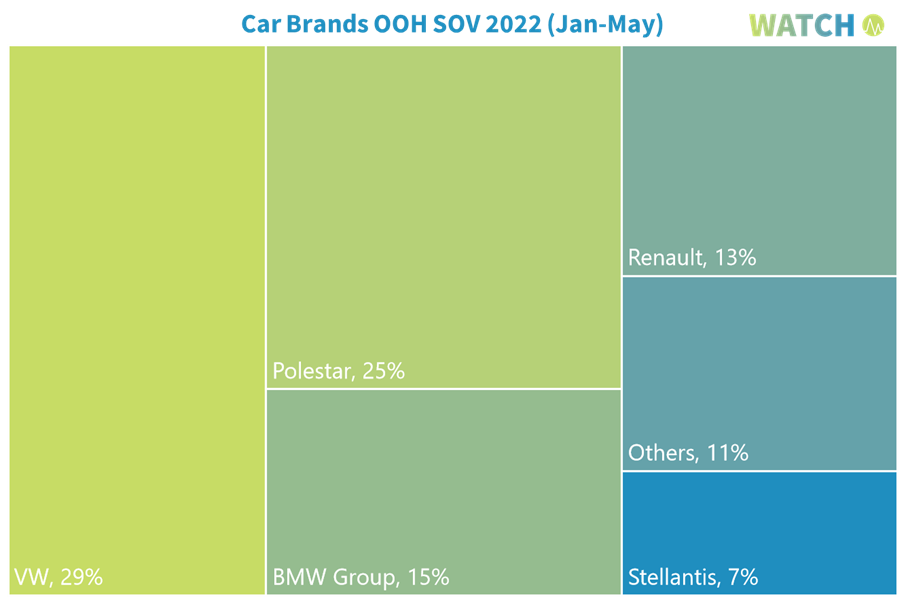 Centra was the most active brand on OOH in May (cycles 10-11), according to PML Group’s WATCH market intelligence data. The Musgrave-owned brand was visible on large format and both classic and digital 6 Sheets, mainly promoting the outlet’s own range of goods. 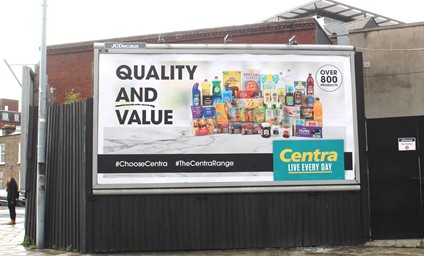 Another Musgrave brand, SuperValu, is also among the top five for the month, supporting their Real Rewards app. They have also taken a multiformat approach, featuring on roadside large format, bus shelters, T-Sides and Metropoles, as well as digital 6 Sheets and Bridges.

The month’s top five brands are rounded off by JD Sports, Disney+ and Allianz. 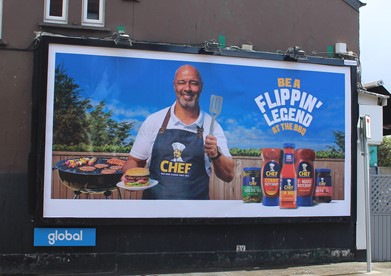 Retail was by far the biggest spending category on OOH in May, accounting for 15% of all OOH spend across the two cycles. The month also saw the return of Chef’s summer BBQ campaign, again featuring Paul McGrath on large format and 6 Sheets. It helped take the Food category to fourth spot on the list for May – a list which also includes Finance, Beers and Media.

Consumer spending rises across April and May

The latest data on consumer spending from the Central Bank and Bank of Ireland highlights the appetite among consumers to engage in social and leisure activities over the coming months. 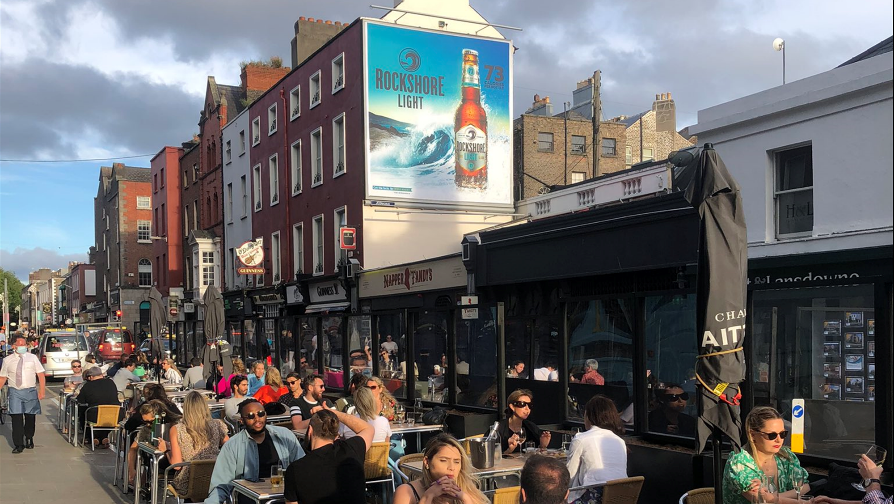 According to Drinks Industry Ireland, hospitality’s restaurant and dining sector witnessed an increase in card spend of 143% in April to nearly €471 million. This compares to last year’s figure of €194 million according to debit and credit card data from the Central Bank. Drinks Industry Ireland shared data on entertainment and social spend which reflect a strong year-on-year increase.

Overall card spend on entertainment rose by 39% in April, up by €70 million to nearly €252 million compared to a year ago. At €337 million, social spending also increased by 83% compared to the previous year. This was driven by an increase in restaurant spend.

Bank of Ireland also recorded an increase in consumer spending in May. Consumer spending increased by 13% last month despite fears about inflation with sales up across several sectors including pubs, restaurants, and takeaways. Social spending rose 14% in May, with spending in pubs up 21%, restaurant spending rising 14% and outlay in fast-food outlets increasing 15%, but people also returned to hosting guests, with catering spend up 17%.

“Whilst April’s spending levels painted a mixed economic picture consumers certainly didn’t hold back in May, sparking an overall spending rise of 13% and boosting social, retail (clothing spend rose by 16%) and accommodation businesses amongst others,” said Jilly Clarkin, head of customer journeys and SME markets at Bank of Ireland.