Colum Harmon, marketing director PML Group with this week’s Out \ Look on Out of Home.

Summer and Christmas are two traditionally high spending periods for the soft drink category, and this has been the case in June 2022 also. The top spending campaign for the month, which includes cycles 12 and 13, was Coca Cola. The campaign, centred on the brand’s association with music, ran on a range of formats including 48 Sheets, Bus Shelters and Digital Bridges. The soft drink brand accounted for 3.5% of all OOH display value in June.

In second spot, with a share of voice of just over 2%, is Guinness Storehouse. The visitor attraction appealed to a domestic and tourist audience with impactful OOH advertising featuring on both digital and classic formats, including T-Sides, Transvision, and Digital Golden Squares.

Bank of Ireland continue to target account switchers, particularly those who must close KBC and Ulster Bank accounts in the coming weeks and months.

Outdoor’s ability to drive consumers online via direct instant response or more delayed response is seen in the Irish Sun’s campaign for its website.  Disney+ round out the top five with its campaign for the second season of the popular show, Only Murders in the Building.

Turning to categories now, and its Beers and Ciders that narrowly took top spot for the month with campaigns featured including Guinness 0.0 and Rockshore. Retail, including SuperValu, Lidl GAA and JD Sports was the second most active sector in June.

The WATCH data behind these figures is a result of PML Group’s 100% monitoring of the OOH market every cycle.

The first set of Census 2022 results were released recently by the CSO. For the first time since 1851, the population of the Republic of Ireland now exceeds five million. The new figure of 5.12 million represents an increase of 8% since the last census in 2016. Although there has been population growth in every county in the country in that six-year period, it is in some of the counties in Leinster that the growth has been biggest. 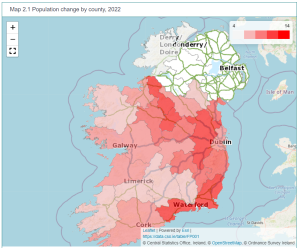 These initial results correlate with a recent B&A ‘Sign of the Times’ report, which highlighted the growing urbanisation of the country. The report states that  ‘there has been a steady increase in those living in urban areas in Ireland between 1991 (57.1%) and 2020 (63.7%). Major technological and behavioural changes have shifted the makeup of society on a labour basis, which in turn feeds into the geography of where people reside.’

As the population moves more and more towards the bigger towns and cities, OOH is in a strong position to communicate with consumers in these increasingly important centres. For example, three in four 48 Sheet billboards are in Dublin Plus, Cork, Galway, Limerick and Waterford. Just over 70% of Bus Shelter locations are in the Dublin Plus area.

Out of home is THE location-based channel and these new figures show that the audience for OOH media continues to expand as our population shifts.